The evil that men do - The Lucifer Effect

Robert Levine reviews the recent book "The Lucifer Effect: Understanding How Good People Turn Evil," by Philip Zimbardo, the man who did the famous Stanford Prison Experiment that has become a cornerstone of social psychology (PDF of review here). 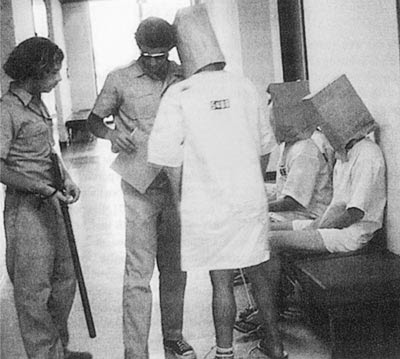 The 1971 Stanford Prison Experiment, in which subjects (ordinary college-age men) were assigned to play the role of a prisoner or guard, demonstrated that situations may be more powerful than personality traits in affecting behavior. Subjects playing the role of guards in the Stanford Prison Experiment were quickly transformed into abusers. This scene eerily evokes the photos taken decades later by the guards at Abu Ghraib prison in Iraq.

A clip from the review:

What, Zimbardo asks, leads ordinary people to do bad things, things they never would have imagined doing? Most evildoing, it becomes depressingly clear, is driven by rather ordinary social-psychological reactions. Zimbardo offers an extensive list and discussion of the toxic situational forces and normal psychological reactions to them that tend to activate the Lucifer effect. He provides a detailed, intelligent and workable program for resisting unwanted social influence, highlighting dangers and offering tangible prescriptions for neutralizing negative effects. There are, for example, mini-tutorials on how to distinguish between just and unjust authorities, on being careful not to sacrifice one's freedom for the illusion of security, and on learning to recognize when, where and how to stand up to unjust systems.

The final chapter is a gem. Here Zimbardo seamlessly demonstrates how the same social psychology that may exploit our worst instincts can be reconstrued to cultivate the best in ourselves. Altruism, like evil, is readily responsive to situational forces, and Zimbardo suggests strategies for tapping into these potentialities. He also presents a provocative, multidimensional taxonomy of heroism that I hope will stimulate long-overdue research and education in this area.

Posted by Deric Bownds at 6:40 AM
Email ThisBlogThis!Share to TwitterShare to FacebookShare to Pinterest
Blog Categories: culture/politics, emotion, fear/anxiety/stress, psychology