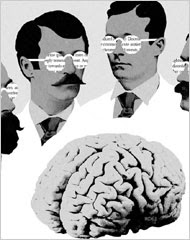 This is the title of an Op-Ed piece in the 9/13/2007 NY Times by Sally Satel which describes the difficulties and issues faced by the forthcoming revision (due in 2012) of the Diagnostic and Statistical Manual of Mental Disorders (PDF here). It faces issue such as the 40-fold jump in diagnosis of childhood bipolar disorder from 1994 to 2003. Some clips from the article:

We still don’t know how much of this increase represents long-overdue care of mentally ill youth and how much comes from facile labeling of youngsters who are merely irritable and moody...Part of the confusion stems from the lack of a discrete definition of juvenile bipolar illness in the diagnostic manual. But there is a deeper problem: despite the great progress being made in neuroscience, we still don’t have a clear picture of the brain mechanisms underlying bipolar illness — or most other mental illnesses... many patients meet several diagnostic definitions at once. Roughly half of adults with clinical depression, for example, also have symptoms that fit the definition of an anxiety disorder...the link between diagnosis and treatment is relatively weak. Antidepressants like Prozac help treat not only depression but also panic disorder, obsessive-compulsive disorder, bulimia and social phobia. This explains why clinicians often treat by symptom rather than diagnosis. Paranoia, for example, is treated with an antipsychotic drug whether it occurs in the context of schizophrenia, bipolar illness or methamphetamine use.

An updated manual..is unlikely to transform treatment substantially — after all, revising diagnoses is still just another way to describe mental conditions we don’t fully understand. But these refinements may well stimulate valuable new inquiry, enabling swifter progress in understanding the mechanisms of disease, better deployment of treatments we have and more efficient discovery of new ones.

Posted by Deric Bownds at 6:00 AM
Email ThisBlogThis!Share to TwitterShare to FacebookShare to Pinterest
Blog Categories: culture/politics, emotion, fear/anxiety/stress, futures