Mark Edmundson offers an essay in the NY Times of 9/9/2007 (PDF here)on the legacy of Freud's last days that I found fascinating. Without renouncing his atheism, Freud describes in a controversial book on Moses what he sees as some useful consequences of the Jewish faith. Here are some clips from the essay: 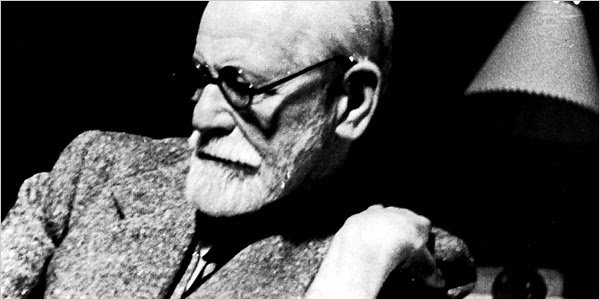 About two-thirds of the way into the volume, he makes a point that is simple and rather profound — the sort of point that Freud at his best excels in making. Judaism’s distinction as a faith, he says, comes from its commitment to belief in an invisible God, and from this commitment, many consequential things follow. Freud argues that taking God into the mind enriches the individual immeasurably. The ability to believe in an internal, invisible God vastly improves people’s capacity for abstraction. “The prohibition against making an image of God — the compulsion to worship a God whom one cannot see,” he says, meant that in Judaism “a sensory perception was given second place to what may be called an abstract idea — a triumph of intellectuality over sensuality.”

Freud speculates that one of the strongest human desires is to encounter God — or the gods — directly. We want to see our deities and to know them. Part of the appeal of Greek religion lay in the fact that it offered adherents direct, and often gorgeous, renderings of the immortals — and also, perhaps, the possibility of meeting them on earth. With its panoply of saints, Christianity restored visual intensity to religion; it took a step back from Judaism in the direction of the pagan faiths. And that, Freud says, is one of the reasons it prospered.

If people can worship what is not there, they can also reflect on what is not there, or on what is presented to them in symbolic and not immediate terms. So the mental labor of monotheism prepared the Jews — as it would eventually prepare others in the West — to achieve distinction in law, in mathematics, in science and in literary art. It gave them an advantage in all activities that involved making an abstract model of experience, in words or numbers or lines, and working with the abstraction to achieve control over nature or to bring humane order to life. Freud calls this internalizing process an “advance in intellectuality,” and he credits it directly to religion.

Freud’s argument suggests that belief in an unseen God may prepare the ground not only for science and literature and law but also for intense introspection. Someone who can contemplate an invisible God, Freud implies, is in a strong position to take seriously the invisible, but perhaps determining, dynamics of inner life. He is in a better position to know himself. To live well, the modern individual must learn to understand himself in all his singularity. He must be able to pause and consider his own character, his desires, his inhibitions and values, his inner contradictions. And Judaism, with its commitment to one unseen God, opens the way for doing so. It gives us the gift of inwardness.

It seems to me that the same points could be made about Buddhism and other eastern religions.
Posted by Deric Bownds at 6:30 AM
Email ThisBlogThis!Share to TwitterShare to FacebookShare to Pinterest
Blog Categories: culture/politics, religion