Did Alex really "want" a cracker? 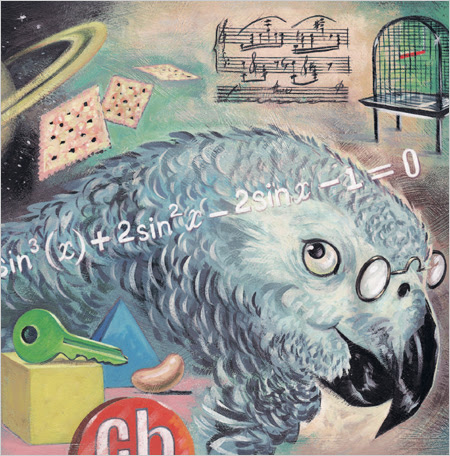 New York Times science writer George Johnson, who is one very intelligent guy, has done a nice piece on the capabilities and history of Alex the parrot (PDF here). I was unaware of several of the behaviors that had been noted in Alex:

“Want a nut!” Alex demanded. The interview was over. “Want a nut!” he repeated. “Nnn ... uh ... tuh.”...Dr. Pepperberg was flabbergasted. “Not only could you imagine him thinking, ‘Hey, stupid, do I have to spell it for you?’ ” she said. “This was in a sense his way of saying to us, ‘I know where you’re headed! Let’s get on with it.’ ”....She is quick to concede the impossibility of proving that the bird was actually verbalizing its internal deliberations. Only Alex knew for sure.

Next to infinity, one of the hardest concepts to grasp is zero. Toward the end of his life Alex may have been coming close. In a carnival shell game, an experimenter would put a nut under one of three cups and then shuffle them around. Alex would pick up the cup where the prize was supposed to be. If it wasn’t there he’d go a little berserk — a small step, maybe, toward understanding nothingness.

A bigger leap came in an experiment about numbers, in which the parrot was shown groups of two, three and six objects. The objects within each set were colored identically, and Alex was asked, “What color three?”.... “Five,” he replied perversely (he was having a bad attitude day), repeating the answer until the experimenter finally asked, “O.K., Alex, tell me, ‘What color five?’ ”....“None,” the parrot said....Bingo. There was no group of five on the tray. It was another of those high huneker moments. Alex had learned the word “none” years before in a different context. Now he seemed to be using it more abstractly....Dr. Pepperberg reported the result with appropriate understatement: “That zero was represented in some way by a parrot, with a walnut-sized brain whose ancestral evolutionary history with humans likely dates from the dinosaurs, is striking.”
Posted by Deric Bownds at 6:45 AM
Email ThisBlogThis!Share to TwitterShare to FacebookShare to Pinterest
Blog Categories: animal behavior, language