A pill to boost or restore memory? 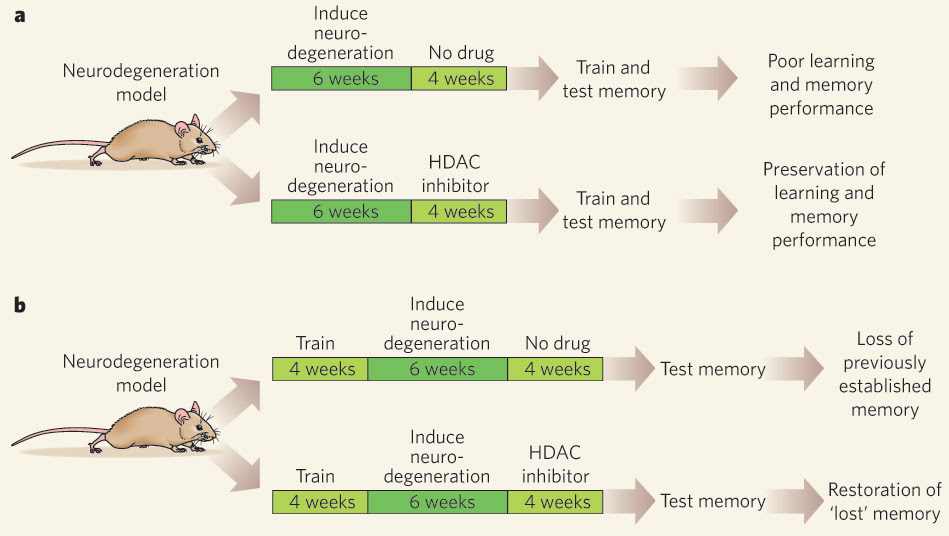 a, (click on figure to enlarge it.) Mouse models of age-dependent neurodegeneration exhibit poor learning and memory performance in spatially based learning tasks. However, when Fischer et al. administered HDAC inhibitors for 4 weeks before training, the performance of the mice was restored to essentially normal levels. b, After receiving HDAC inhibitors, the mice could even recall memories that had been formed and then apparently lost through neurodegeneration.

The authors provide a convincing proof-of-principle demonstrating that the inhibition of histone deacetylases can improve memory capabilities in a genetically engineered mouse model of neurodegeneration in the central nervous system (CNS).

Histone deacetylases (HDACs) are enzymes that remove acetyl groups from lysine amino acids in proteins, including proteins in the nucleus called histones. Histones interact with DNA to form a complex known as chromatin and control the accessibility of DNA for gene transcription. Generally, acetylated histones form active chromatin complexes with DNA, which makes the DNA accessible to RNA polymerases, thereby regulating gene transcription. Inhibitors of HDACs block the ability of these enzymes to deacetylate histones, promoting histone acetylation in the nucleus and thus altering gene expression. Because altered transcription is known to be necessary for the formation of long-term memories, HDAC inhibitors have the potential to boost memory formation. This has been demonstrated in normal rats and mice; and the effectiveness of HDAC inhibitors in restoring memory function in mouse models of a human learning disability called Rubinstein–Taybi syndrome has also been documented.

Fischer and colleagues extend these findings through their studies of a genetically manipulated mouse model that they have generated. Such animals show age-dependent neurodegeneration in the hippocampus, a brain region that is essential for long-term spatial-memory formation in rodents. Indeed, using a variety of behavioural assays, the authors previously showed that these mice have pronounced deficits in recalling long-term spatial memories.

In their present work, Fischer et al. demonstrate that HDAC inhibitors restore the capacity for spatial memory. They also show that another known memory-boosting manipulation — environmental enrichment through exposing the animals to a variety of experiences over their lifetime — improves the memory of the genetically engineered mice by increasing the levels of histone acetylation in their hippocampi. Together, these findings provide compelling evidence that increased histone acetylation can overcome the diminution of memory function seen in this mouse model of age-dependent neurodegeneration.

Posted by Deric Bownds at 8:54 AM
Email ThisBlogThis!Share to TwitterShare to FacebookShare to Pinterest
Blog Categories: aging, brain plasticity, memory/learning