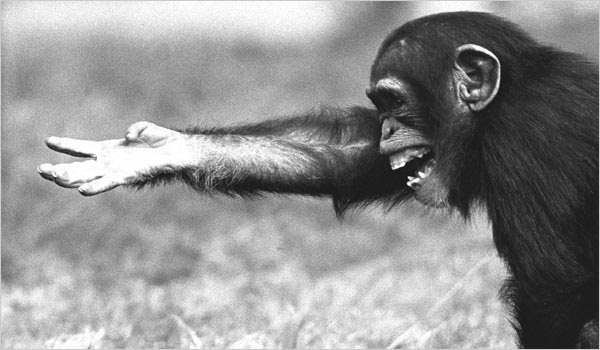 Pollick and de Waal have observed the association of manual and facial/vocal signals in groups of chimpanzees and bonobos, distinguishing 31 manual gestures and 18 facial/vocal signals. Bonobos, which became a separate species from chimpanzees 2.5 million years ago, seem to make special use of hand gestures that elicit a response from other bonobos much more often when included in the mix of sounds and expressions.

"...our closest primate relatives use brachiomanual gestures more flexibly across contexts than they do facial expressions and vocalizations. Gestures seem less closely tied to particular emotions, such as aggression or affiliation, hence possess a more adaptable function. Gestures are also evolutionarily younger, as shown by their presence in apes but not monkeys, and likely under greater cortical control than facial/ vocal signals .... This observation makes gesture a serious candidate modality to have acquired symbolic meaning in early hominins. As such, the present study supports the gestural origin hypothesis of language."