Before I was seduced by studying how the brain works, I used to be a membrane biophysics, cellular, molecular biologist, and occasionally I come across a bit of work that is so neat and powerful that I want to mention it.

Wang et al. engineer the genetic delivery into neurons of a light sensitive rhodopsin membrane channel protein (ChR2), from an algae. Illumination of ChR2-positive neurons in cortical slices produces rapid photocurrents that can elicit action potentials. The timing, number, and spatial location of these action potentials can be controlled precisely by light, allowing functional mapping of cortical circuits. Here is their abstract:

To permit rapid optical control of brain activity, we have engineered multiple lines of transgenic mice that express the light-activated cation channel Channelrhodopsin-2 (ChR2) in subsets of neurons. Illumination of ChR2-positive neurons in brain slices produced photocurrents that generated action potentials within milliseconds and with precisely timed latencies. The number of light-evoked action potentials could be controlled by varying either the amplitude or duration of illumination. Furthermore, the frequency of light-evoked action potentials could be precisely controlled up to 30 Hz. Photostimulation also could evoke synaptic transmission between neurons, and, by scanning with a small laser light spot, we were able to map the spatial distribution of synaptic circuits connecting neurons within living cerebral cortex. We conclude that ChR2 is a genetically based photostimulation technology that permits analysis of neural circuits with high spatial and temporal resolution in transgenic mammals. 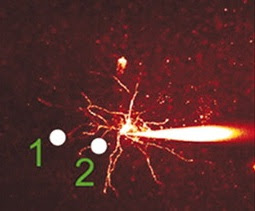