Tognoli et al. offer an interesting study (PDF here). They employed a rhythmic task in which pairs of subjects move their fingers at their own preferred frequency and amplitude with and without vision of the other's movements. Previous behavioral studies had shown that unintended spontaneous coupling may occur (transitions from independent to phase-locking behavior) when subjects see each other's hand movements. They were able to identify three distinct EEG rhythms [alpha - (mean frequency of 10.61 Hz); mu - (mean frequency of 9.63 Hz); and a lateralized centro-parietal component that they call phi (spanning the range 9.2–11.5 Hz; Fig. 2B)], one of which (phi, located over right centro-parietal cortex) "neuromarked" the presence or absence of social coordination. Here is their abstract:

Many social interactions rely upon mutual information exchange: one member of a pair changes in response to the other while at the same time producing actions that alter the behavior of the other. However, little is known about how such social processes are integrated in the brain. Here, we used a specially designed dual-electroencephalogram system and the conceptual framework of coordination dynamics to identify neural signatures of effective, real-time coordination between people and its breakdown or absence. High-resolution spectral analysis of electrical brain activity before and during visually mediated social coordination revealed a marked depression in occipital alpha and rolandic mu rhythms during social interaction that was independent of whether behavior was coordinated or not. In contrast, a pair of oscillatory components (phi1 and phi2) located above right centro-parietal cortex distinguished effective from ineffective coordination: increase of phi1 favored independent behavior and increase of phi2 favored coordinated behavior. The topography of the phi complex is consistent with neuroanatomical sources within the human mirror neuron system. A plausible mechanism is that the phi complex reflects the influence of the other on a person's ongoing behavior, with phi1 expressing the inhibition of the human mirror neuron system and phi2 its enhancement. 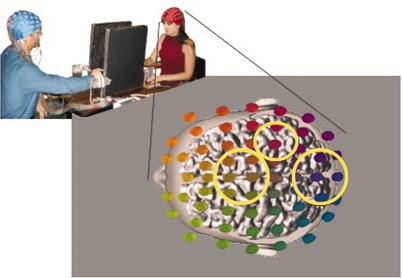 Identification of spectral components in the brain activity of participants. (A) The dual-EEG of pairs was recorded with two caps each containing 60 channels. The head schematic of the subject on the right shows the 60 electrodes color-coded to reflect their spatial location. Circled areas indicate regions of peak rhythmic activity: mu (electrodes colored brown situated above Rolandic fissure); phi (burgundy above right centro-parietal area); and alpha (blue above the occipital pole). Spectral plots were used to identify mu, phi, and alpha components during visual contact.

Posted by Deric Bownds at 6:22 AM
Email ThisBlogThis!Share to TwitterShare to FacebookShare to Pinterest
Blog Categories: social cognition