Pessiglione et al. (PDF here) do an interesting experiment in which they flash a picture of either a penny or a pound coin for 17, 50, 100 msec. followed by a masking picture. Subjects can report seeing the last, but not the first two images, so these first two are assumed to be subliminal. To characterize the effects of the monetary stakes, they recorded not only brain activity but also skin conductance and hand-grip force. Skin conductance response (SCR) is linked to autonomic sympathetic arousal and is interpreted as reflecting an affective evaluation of the monetary stake. Online visual feedback of the force exerted was displayed as a fluid level moving up and down within a thermometer depicted on the screen (see figure). Subjects were instructed that the higher the fluid level rose, the more of the monetary stake they would get to keep. At the end of the trial, subjects were given visual feedback of the amount of money that they had accumulated.

The incentive force task. Successive screens displayed in one trial are shown from left to right, with durations in ms. Coin images, either one pound (£1) or one penny (1p), indicate the monetary value attributed to the top of the thermometer image. The fluid level in the thermometer represents the online force exerted on the hand grip. The last screen indicates cumulative total of the money won so far...

The data show that the 50 msec stimulus of a pound coin image, which is not reported as seen, causes an increase in skin conductance and activity in the ventral pallidum that is almost as large as the increase caused by the 100 msec stimulus, which is seen. Both activities are much lower for the one penny stimulus. (Ventral pallidal neurons encode rewarding properties of environmental stimuli, and are thought to play a role in incentive motivation.) 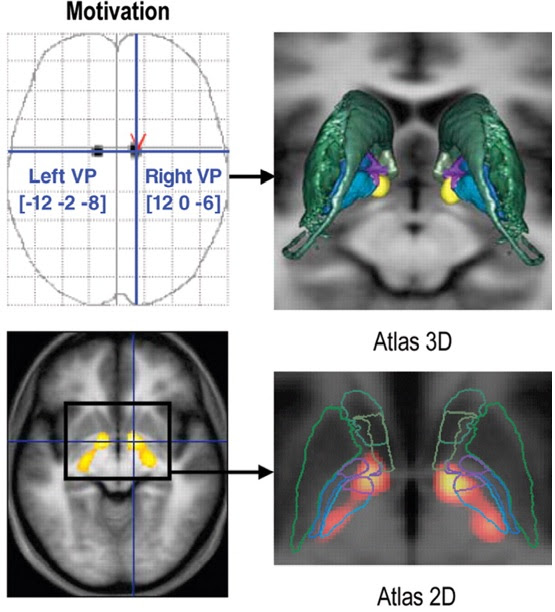 Caudate, putamen, and accumbens are shown in green; external and internal pallidum are shown in blue, with limbic sectors in violet.
Posted by Deric Bownds at 7:00 AM
Email ThisBlogThis!Share to TwitterShare to FacebookShare to Pinterest
Blog Categories: emotion, motivation/reward, unconscious