The amygdala as the hub of three brain networks supporting our social life.

I pass on this very useful summary by Bickart et al. that summarizes brain connectivity experiments in rodents, monkeys, and humans to develop a description that has the amygdala as a anchor in three partially distinct brain networks (serving perception, affiliation, and aversion) that each engage a distinct domain of social behavior. Their highlights, followed by the abstract and the main graphic:


• We synthesize extant animal and human data to describe networks of the social brain.

• The amygdala anchors 3 networks, each supporting a distinct social process.

• People with stronger connectivity in 2 of these networks have larger social networks.

• People with degeneration in these networks have corresponding social deficits.

• We discuss future directions and implications for this novel componential framework.


A growing body of evidence suggests that the amygdala is central to handling the demands of complex social life in primates. In this paper, we synthesize extant anatomical and functional data from rodents, monkeys, and humans to describe the topography of three partially distinct large-scale brain networks anchored in the amygdala that each support unique functions for effectively managing social interactions and maintaining social relationships. These findings provide a powerful componential framework for parsing social behavior into partially distinct neural underpinnings that differ among healthy people and disintegrate or fail to develop in neuropsychiatric populations marked by social impairment, such as autism, antisocial personality disorder, and frontotemporal dementia.

Here is their central graphic: 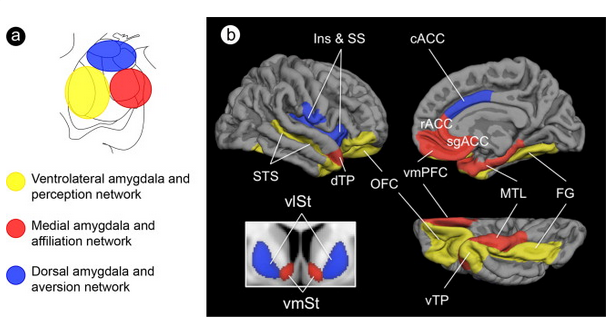 Posted by Deric Bownds at 3:00 AM
Email ThisBlogThis!Share to TwitterShare to FacebookShare to Pinterest
Blog Categories: social cognition