Brain stimulation, a therapy increasingly used for neurological and psychiatric disease, traditionally is divided into invasive approaches, such as deep brain stimulation (DBS), and noninvasive approaches, such as transcranial magnetic stimulation. The relationship between these approaches is unknown, therapeutic mechanisms remain unclear, and the ideal stimulation site for a given technique is often ambiguous, limiting optimization of the stimulation and its application in further disorders. In this article, we identify diseases treated with both types of stimulation, list the stimulation sites thought to be most effective in each disease, and test the hypothesis that these sites are different nodes within the same brain network as defined by resting-state functional-connectivity MRI. Sites where DBS was effective were functionally connected to sites where noninvasive brain stimulation was effective across diseases including depression, Parkinson's disease, obsessive-compulsive disorder, essential tremor, addiction, pain, minimally conscious states, and Alzheimer’s disease. A lack of functional connectivity identified sites where stimulation was ineffective, and the sign of the correlation related to whether excitatory or inhibitory noninvasive stimulation was found clinically effective. These results suggest that resting-state functional connectivity may be useful for translating therapy between stimulation modalities, optimizing treatment, and identifying new stimulation targets. More broadly, this work supports a network perspective toward understanding and treating neuropsychiatric disease, highlighting the therapeutic potential of targeted brain network modulation. 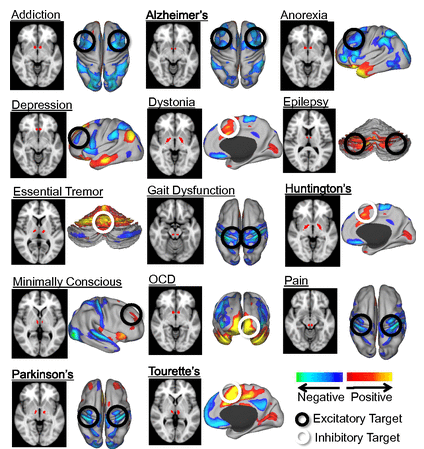 Fig. 2. Sites for invasive and noninvasive brain stimulation with the best evidence of therapeutic efficacy in each disease are functionally connected. For each disease, the site at which DBS is most effective is shown in red. Resting-state functional connectivity with this site is shown along with the correspondence to the site at which noninvasive stimulation is most effective in each disease (circles). Black circles indicate sites at which noninvasive excitatory stimulation (more than 5 Hz TMS [transcranial magnetic stimulation] or anodal tDCS [transcranial direct current stimulation]) has been reported to be efficacious. White circles indicate sites where inhibitory stimulation (less than 1 Hz TMS or cathodal tDCS) has been reported to be efficacious.

Posted by Deric Bownds at 3:30 AM
Email ThisBlogThis!Share to TwitterShare to FacebookShare to Pinterest
Blog Categories: brain plasticity, consciousness, emotion, self