Having 'no self' as self transcendence, or spirituality.

I've finally read another item in my queue of potential posts, an interview by Gary Gutting of Sam Harris, whose most recent book is titled "Waking Up: A Guide to Spirituality Without Religion. " I recommend the article to philosophically inclined MindBlog readers. Harris takes deities and religion to be nonsense, but argues that spirituality (probably the foundation of many religions) is a noble pursuit. The following clip is Harris on contrasting the claims about mind and cosmos made by science and religion:


There is a big difference between making claims about the mind and making claims about the cosmos. Every religion (including Buddhism) uses first-person experience to do both of these things, but the latter pretensions to knowledge are almost always unwarranted. There is nothing that you can experience in the darkness of your closed eyes that will help you understand the Big Bang or the connection between consciousness and the physical world. Look within, and you will find no evidence that you even have a brain, much less gain any insight into how it works.

However, one can discover specific truths about the nature of consciousness through a practice like meditation. Religious people are always entitled to claim that certain experiences are possible — feelings of bliss or selfless love, for instance. But Christians, Hindus and atheists have experienced the same states of consciousness. So what do these experiences prove? They certainly don’t support claims about the unique divinity of Christ or about the existence of the monkey god Hanuman. Nor do they demonstrate the divine origin of certain books. These reports only suggest that certain rare and wonderful experiences are possible. But this is all we need to take “spirituality” (the unavoidable term for this project of self-transcendence) seriously. To understand what is actually going on — in the mind and in the world — we need to talk about these experiences in the context of science.

In the interview Harris gives one of the nicest and most simple expositions of how our sense of self can be an illusion that I have seen. It is a response to Gutting's question:


You deny the existence of the self, understood as “an inner subject thinking our thoughts and experiencing our experiences.” You say, further, that the experience of meditation (as practiced, for example, in Buddhism) shows that there is no self. But you also admit that we all “feel like an internal self at almost every waking moment.” Why should a relatively rare — and deliberately cultivated — experience of no-self trump this almost constant feeling of a self?


Because what does not survive scrutiny cannot be real. Perhaps you can see the same effect in this perceptual illusion: 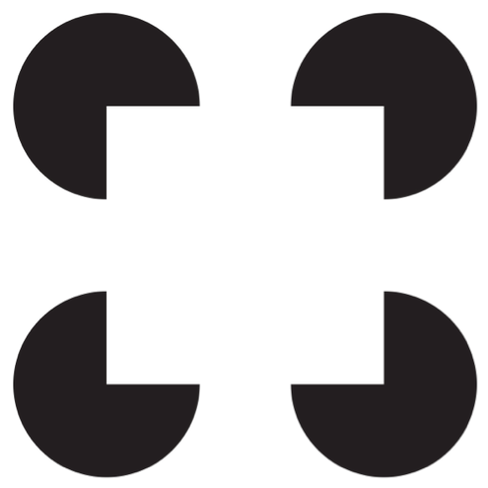 It certainly looks like there is a white square in the center of this figure, but when we study the image, it becomes clear that there are only four partial circles. The square has been imposed by our visual system, whose edge detectors have been fooled. Can we know that the black shapes are more real than the white one? Yes, because the square doesn’t survive our efforts to locate it — its edges literally disappear. A little investigation and we see that its form has been merely implied.

What could we say to a skeptic who insisted that the white square is just as real as the three-quarter circles and that its disappearance is nothing more than, as you say, “a relatively rare — and deliberately cultivated — experience”? All we could do is urge him to look more closely.

The same is true about the conventional sense of self — the feeling of being a subject inside your head, a locus of consciousness behind your eyes, a thinker in addition to the flow of thoughts. This form of subjectivity does not survive scrutiny. If you really look for what you are calling “I,” this feeling will disappear. In fact, it is easier to experience consciousness without the feeling of self than it is to banish the white square in the above image.

Posted by Deric Bownds at 4:43 AM
Email ThisBlogThis!Share to TwitterShare to FacebookShare to Pinterest
Blog Categories: consciousness, culture, culture/politics, mindfulness, religion, self