Rapid orienting to positive, as well as negative, emotional stimuli.

Most of the work on how emotions focus our attention has focused on negative stimuli (snakes, angry faces, etc.) Brosch et al. use ERP measurement to note that our attention also can very reliably be captured by positive nurturance stimuli such as baby faces. The results confirm that biological relevance, and not exclusively fear, produces an automatic spatial orienting toward the location of a stimulus. From the paper:

...we recorded event-related potentials from 20 subjects performing a dot-probe task in which the cues were fear-inducing and nurturance-inducing stimuli (i.e., anger faces and baby faces). Highly similar validity modulation was found for the P1 time-locked to target onset, indicating early attentional capture by both positive and negative emotional stimuli. Topographic segmentation analysis and source localization indicate that the same amplification process is involved whether attention orienting is triggered by negative, fear-relevant stimuli or positive, nurturance-relevant stimuli. 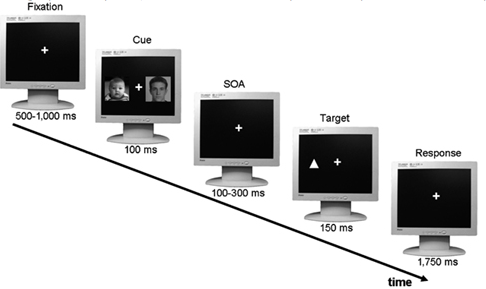 Posted by Deric Bownds at 5:30 AM
Email ThisBlogThis!Share to TwitterShare to FacebookShare to Pinterest
Blog Categories: attention/perception, faces, social cognition