Want to chill out? Exaggerate you abilities. 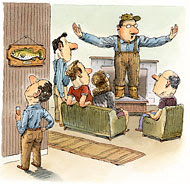 An interesting article by Gramzow et al. in the Feburary issue of Emotion finds that exaggeration (such as students inflating their grade-point average) doesn't induce the anxiety that usually goes with lying or keeping secrets. Some clips from Benedict Carey's discussion of the article:

...embroiderers often work to live up to the enhanced self-images they project. The findings imply that some kinds of deception are aimed more at the deceiver than at the audience, and they may help in distinguishing braggarts and posers from those who are expressing personal aspirations, however clumsily...The researchers pulled the students’ records, with permission, and found that almost half had exaggerated their average by as much as six-tenths of a point. Yet the electrode readings showed that oddly enough, the exaggerators became significantly more relaxed while discussing their grades...It was a robust effect, the sort of readings you see when people are engaged in a positive social encounter, or when they’re meditating...The ones who exaggerated the most appeared the most calm and confident.

Students who exaggerate their current grade point averages (GPAs) report positive emotional and motivational orientations toward academics. It is conceivable, however, that these self-reports mask underlying anxieties. The current study examined cardiovascular reactivity during an academic interview in order to determine whether exaggerators respond with a pattern suggestive of anxiety or, alternatively, equanimity. Sixty-two undergraduates were interviewed about their academic performance. Participants evidenced increased sympathetic activation (indexed with preejection period) during the interview, suggesting active task engagement. Academic exaggeration predicted parasympathetic coactivation (increased respiratory sinus arrhythmia). Observer ratings indicated that academic exaggeration was coordinated with a composed demeanor during the interview. Together, these patterns suggest that academic exaggeration is associated with emotional equanimity, rather than anxiety. The capacity for adaptive emotion regulation--to keep a cool head when focusing on academic performance--offers one explanation for why exaggerators also tend to improve academically. These findings have implications for the broader literature on self-evaluation, emotion, and cardiovascular reactivity.

Posted by Deric Bownds at 6:00 AM
Email ThisBlogThis!Share to TwitterShare to FacebookShare to Pinterest
Blog Categories: emotion, psychology, self help