Our brains can choose our actions 10 sec before awareness

Here is an elegant update from Soon et al. of the continuing story that started with Libet's original observation that supplementary motor area (SMA) becomes active before our subjective sense of consciously willing an action. This work ignited a a long controversy as to whether subjectively 'free' decisions are determined by brain activity ahead of time. These new results go substantially further than those of previous studies by showing that the earliest predictive information is encoded in specific regions of frontopolar and parietal cortex, up to 10 seconds before it enters awareness (and not in SMA), presumably reflecting the operation of a network of high-level control areas that begin to prepare an upcoming decision. This preparatory time period in high-level control regions is considerably longer than that reported previously for motor-related brain regions. 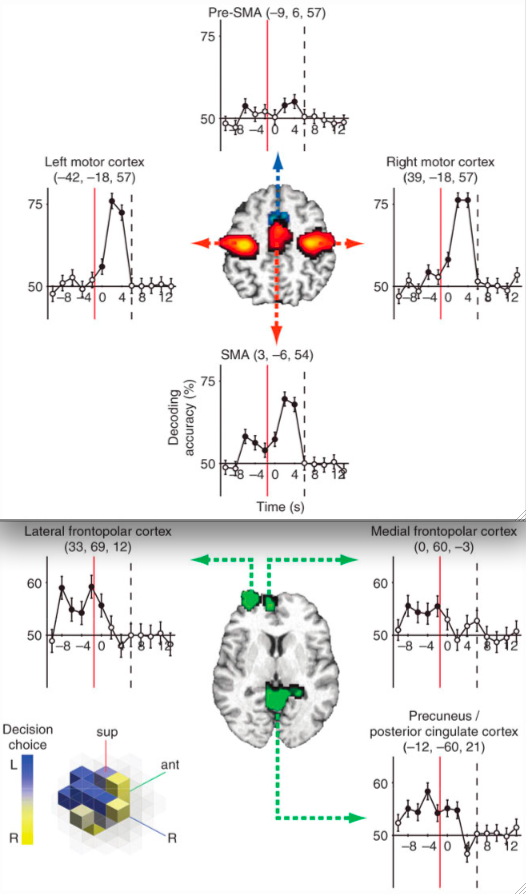 Figure (click to enlarge) Color-coded brain areas show regions where the specific outcome of a motor decision could be decoded before (bottom, green) and after (top, red) it had been made. The graphs separately depict for each time point the accuracy with which the subject's free choice to press the left or right button could be decoded from the spatial pattern of brain activity in that region (solid line, left axis; filled symbols, significant at P < 0.05; open symbols, not significant; error bars, s.e.m.; chance level is 50%). As might be expected, the decoding accuracy was higher in cortical areas involved in the motor execution of the response than in areas shaping the upcoming decision before it reaches awareness (note the difference in scale). The vertical red line shows the earliest time at which the subjects became aware of their choices. The dashed (right) vertical line in each graph shows the onset of the next trial. The inset in the bottom left shows the representative spatial pattern of preference of the most discriminative searchlight position in frontopolar cortex for one subject (ant, anterior; sup, superior)
Posted by Deric Bownds at 5:30 AM
Email ThisBlogThis!Share to TwitterShare to FacebookShare to Pinterest
Blog Categories: acting/choosing, attention/perception, consciousness