The iPathology of your iBrain 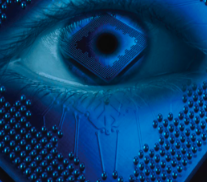 Small and Vorgan offer an engaging article in Scientific American Mind on how daily exposure to television, computers, smart phones, video games, search engines and web browsers is rewiring our brains. A modern generation is rising with brains that are very different from the brains of those of us whose basic brain wiring was laid down in a time when direct social interactions were more the norm. One of the authors (Small) compared brain activities in computer- savvy versus computer-naive 50-60 year olds while searching for accurate information on a topic using Google, subtracting activity associated with just reading a text to determine activity specific to the searching function (which was the same in the two groups). In the baseline scanning session during searching on Google, the computer-savvy subjects engaged their dorsolateral prefrontal cortex while the Internet-naive subjects showed minimal activation in this region. After just five days of practice,the exact same neural circuitry in the front part of the brain became active in the Internet-naive subjects. Five hours on the Internet, and these participants had already rewired their brains.

Our high-tech revolution has plunged us into a state of “continuous partial attention,” which software executive Linda Stone, who coined the term in 1998, describes as continually staying busy—keeping tabs on everything while never truly focusing on anything. Continuous partial attention differs from multitasking, wherein we have a purpose for each task and we are trying to improve efficiency and productivity. Instead, when our minds partially attend, and do so continuously, we scan for an opportunity for any type of contact at every given moment. We virtually chat as our text messages flow, and we keep tabs on active buddy lists (friends and other screen names in an instant message program); everything, everywhere, is connected through our peripheral attention. Although having all our pals online from moment to moment seems intimate, we risk losing personal touch with our real-life relationships and may experience an artificial sense of intimacy as compared with when we shut down our devices and devote our attention to one
individual at a time.

When paying continuous partial attention, people may place their brain in a heightened state of stress. They no longer have time to reflect, contemplate or make thoughtful decisions. Instead they exist in a sense of constant crisis—on alert for a new contact or bit of exciting news or information at any moment. Once people get used to this state, they tend to thrive on the perpetual connectivity. It feeds their ego and sense of self-worth, and it becomes irresistible. Neuroimaging studies suggest that this sense of selfworth may protect the size of the hippocampus—the horseshoeshaped brain region in the medial (inward-facing) temporal lobe, which allows us to learn and remember new information. Psychiatry professor Sonia J. Lupien and her associates at McGill University studied hippocampal size in healthy younger and older adult volunteers. Measures of self esteem correlated significantly with hippocampal size, regardless of age. They also found that the more people felt in control of their lives, the larger the hippocampus. But at some point, the sense of control and self-worth we feel when we maintain continuous partial attention tends to break down—our brains were not built to sustain such monitoring for extended periods. Eventually the hours of unrelenting digital connectivity can create a unique type of brain strain. Many people who have been working on the Internet for several hours without a break report making frequent errors in their work. On signing off, they notice feeling spaced out, fatigued, irritable and distracted, as if they are in a “digital fog.” This new form of mental stress, what Small terms “techno-brain burnout,” is threatening to become an epidemic. Under this kind of stress, our brains instinctively signal the adrenal gland to secrete cortisol and adrenaline. In the short run, these stress hormones boost energy levels and augment memory, but over time they actually impair cognition, lead to depression, and alter the neural circuitry in the hippocampus, amygdala and prefrontal cortex—the brain regions that control mood and thought. Chronic and prolonged techno-brain burnout can even reshape the underlying brain structure.

While the brains of today’s digital natives are wiring up for rapid-fire cyber searches, however, the neural circuits that control the more traditional learning methods are neglected and gradually diminished. The pathways for human interaction and communication weaken as customary one-on-one people skills atrophy. Our U.C.L.A. research team and other scientists have shown that we can intentionally alter brain wiring and reinvigorate some of these dwindling neural pathways, even while the newly evolved technology circuits bring our brains to extraordinary levels of potential.