Cognitive therapy versus medication for depression

DeRubeis et al. offer an interesting review article in Nature Reviews Neuroscience on treatment outcomes and neural mechanisms, from which I pass on part of the abstract and some summary graphs: 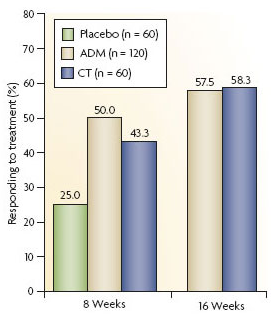 Cognitive therapy and antidepressant medication have comparable effects. This graph shows the response of outpatients who had moderate-to-severe depression to cognitive therapy (CT), antidepressant medication (ADM) or placebo. Patients who were assigned to ADM or to CT showed a significantly higher response rate after 8 weeks of treatment than those who were assigned to placebo. After 16 weeks of treatment the response rates of ADM and CT were almost identical. 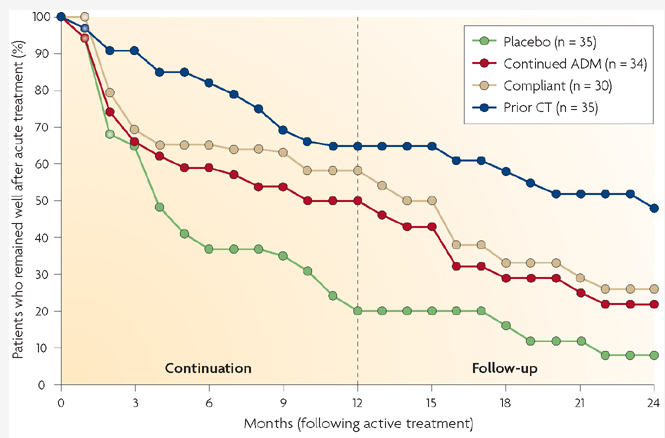 Less relapse after cognitive therapy compared with antidepressant medication. The second phase of the parent antidepressant medication (ADM) versus cognitive therapy (CT) study followed patients who had responded to ADM or to CT3. Patients who had responded to ADM were randomly assigned to either continue ADM treatment for one year (beige and red lines) or to change to placebo treatment for 1 year (green line). Patients who responded to CT were allowed three sessions of CT during the 1-year continuation period. In the follow-up period, none of the patients received any treatment. The figure shows that prior treatment with CT protected against relapse of depression at least as well as the continued provision of ADM, and better than ADM treatment that was subsequently discontinued. Note that the patient group that was given ADM in the continuation year contained a number of patients who did not adhere to the medication regimen. The red line indicates the response of the ADM-continuation group including these non-compliant patients, whereas the beige line shows the response of the patients in this group after the non-compliant patients had been removed from the analysis. 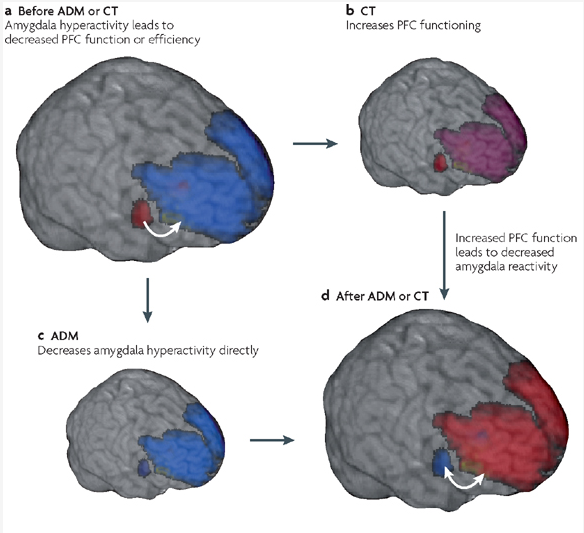 a | During acute depression, amygdala activity is increased (red) and prefrontal activity is decreased (blue) relative to activity in these regions in healthy individuals. b | Cognitive therapy (CT) effectively exercises the prefrontal cortex (PFC), yielding increased inhibitory function of this region. c | Antidepressant medication (ADM) targets amygdala function more directly, decreasing its activity. d | After ADM or CT, amygdala function is decreased and prefrontal function is increased. The double-headed arrow between the amygdala and the PFC represents the bidirectional homeostatic influences that are believed to operate in healthy individuals.

Posted by Deric Bownds at 5:30 AM
Email ThisBlogThis!Share to TwitterShare to FacebookShare to Pinterest
Blog Categories: brain plasticity, fear/anxiety/stress