Why are musical chords cheerful or melancholy?

In the current issue of American Scientist, Cook and Hayashi offer a fascinating article on the psychoacoustics of harmony perception (PDF here). Major and minor chords entered Western music during the Renaissance, when two-part harmonies were supplanted by three-tone chords. The authors argue that human responses to these chords have a biological basis, rather than being learned (the opinion of most musical theorists). Their acoustical model explains harmony in terms of the relative positions of the three notes in a triad and how their complex higher harmonics, or upper partials, interact with them. Those of you interested in science and music should check out the special Nature series of essays on this topic. 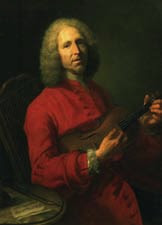 Jean-Philippe Rameau, a French composer and author, wrote his Treatise on Harmony in 1722, one of the first and most influential studies of harmony in Western music. His book noted the profound emotional difference between major and minor chords: “The major mode is suitable for songs of mirth and rejoicing,” he wrote, while the minor mode was suitable for “plaints, and mournful songs.”

From their conclusions, after the analysis section of the paper:

Now that we have a model of how listeners identify a chord as major or minor, we may take the final step and speculate as to why the acoustical valence carries an emotional valence as well. We contend that the emotional symbolism of major and minor chords has a biological basis. Across the animal kingdom, vocalizations with a descending pitch are used to signal social strength, aggression or dominance. Similarly, vocalizations with a rising pitch connote social weakness, defeat or submission. Of course, animals convey these messages in other ways as well, with facial expressions, body posture and so on—but all else being equal, changes in the fundamental frequency of the voice have intrinsic meaning.

This same frequency code has been absorbed, though attenuated, in human speech patterns: A rising inflection is commonly used to denote questions, politeness or deference, whereas a falling inflection signals commands, statements or dominance. How might this translate to a musical context? If we start with a tense, ambiguous chord—for example, the augmented chord containing two 4-semitone intervals— and decrease any one of the three fundamentals by one semitone, the chord will resolve into a major key. It will then have a 5–4, 3–5, or 4–3 semitone structure. Conversely, if we resolve the ambiguous chord by raising any one of the three fundamentals by a semitone, we will obtain a minor chord. The universal emotional response to these chords stems, we believe, directly from an instinctive, preverbal understanding of the frequency code in nature. One of us (Cook) has explored this in more detail (see the bibliography).

Individual tastes and musical styles vary widely. In the West, music has changed over the centuries from styles that employed predominantly the resolved major and minor chords to styles that include more and more dissonant intervals and unresolved chords. Inevitably, some composers have taken this historical trend to its logical extreme, and produced music that fanatically avoids all indications of consonance or harmonic resolution. Such surprisingly colorless “chromatic” music is intellectually interesting, but notably lacking in the ebb and flow of tension and resolution that most popular music employs, and that most listeners crave. Whatever one’s own personal preferences may be for dissonance and unresolved harmonies, some kind of balance between consonance and dissonance, and between harmonic tension and resolution, seems to be essential—genre by genre, and individual by individual—to assure the emotional ups and downs that make music satisfying.

Posted by Deric Bownds at 5:30 AM
Email ThisBlogThis!Share to TwitterShare to FacebookShare to Pinterest
Blog Categories: music