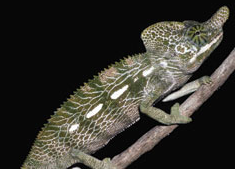 Just to show you the opposite end of the lifespan spectrum - perhaps an antidote to our obsessing over whether we might expand human lifespan from 85 to, say, 105 - here is a curious note from the July 3 Nature on the shortest known vertebrate lifespan: three months.

The Madagascan chameleon Furcifer labordi has an annual life cycle, and spends most of its short life in the egg...Kristopher Karsten of Oklahoma State University in Stillwater and his colleagues monitored individuals from the time of hatching until death during several cycles. They found that they hatch in November; grow at astonishing rates; reach maturity by January; battle fiercely over mates, breed and lay their eggs by February; and then promptly drop dead. For the next nine months, the entire species is represented by eggs...This is the shortest lifespan ever recorded for a four-legged vertebrate animal.

Posted by Deric Bownds at 5:45 AM
Email ThisBlogThis!Share to TwitterShare to FacebookShare to Pinterest
Blog Categories: aging