Nicholas Wade covers recent work by Sirtris, a startup company recently bought by GlaxoSmithKline for $720 million dollars. The drug candidates are activators of the enzyme sirtuin, involved in the 'famine reflex' that can switch body tissues to more efficient metabolism and increase life span in mice and other beasts (see graphic below). The commercially available form is resveratrol, obtained from skins of red grapes. It actually is a mixture of compounds having many actions other than sirtuin activation, some probably undesirable. (I actually ordered the stuff from a nutritional supplement supplier, and I'm playing with the idea of trying it, maybe following blood glucose levels.... the not so minor problem being the possibility that any positive physical, psychological, or chemical reactions to the stuff might be a placebo effect.) 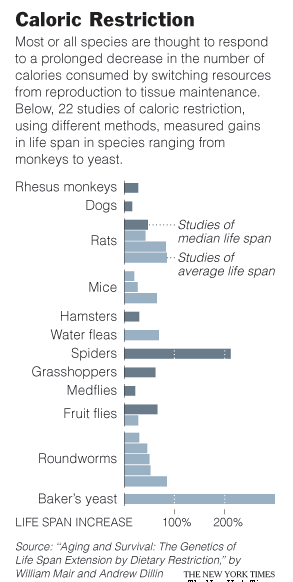