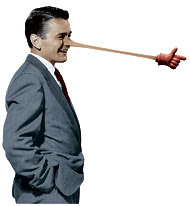 John Tierney has a nice piece in the NYTimes on studies that probe moral flip-flops of the sort evidenced in the current presidential campaign. Does the hypocrite really believe in his heart what he is saying? Clips:

In voting against the Bush tax cut in 2001, Senator John McCain said he “cannot in good conscience support a tax cut in which so many of the benefits go to the most fortunate.” Today he campaigns in favor of extending that same tax cut beyond its expiration date...Senator Barack Obama last year called himself a “longtime advocate” of public financing of election campaigns. This month, he reiterated his “support” for such financing while becoming the first major party presidential nominee ever to reject it for his own campaign...Do you think either of these men is a hypocrite?

Moral hypocrisy allows us to gain the social benefits of appearing virtuous without incurring the personal costs of virtuous behavior. If you can deceive even yourself into believing that you’re acting for the common good, you’ll have more energy and confidence to further your own interests — and your self-halo can persuade others to help you along.

But as useful as hypocrisy can be, it’s apparently not quite as basic as the human instinct to do unto others as you would have them do unto you. Your mind can justify double standards, it seems, but in your heart you know you’re wrong.

Posted by Deric Bownds at 5:40 AM
Email ThisBlogThis!Share to TwitterShare to FacebookShare to Pinterest
Blog Categories: emotion, psychology, social cognition