Gómez-Pinilla contributes a review article to the latest issue of Nature Reviews Neuroscience on how various dietary factors, in addition to some gut and brain hormones, increase the resistance of neurons to insults and promote mental fitness. I pass on one figure dealing with dietary omega-3 fatty acids, followed by a summary table. 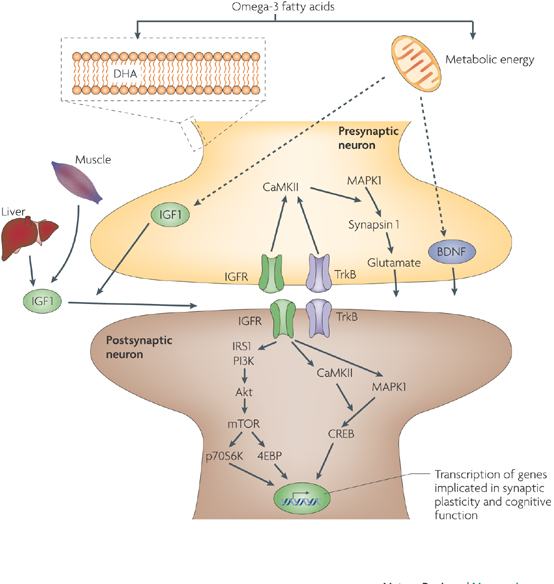 The omega-3 fatty acid docosahexaenoic acid (DHA), which humans mostly attain from dietary fish, can affect synaptic function and cognitive abilities by providing plasma membrane fluidity at synaptic regions. DHA constitutes more than 30% of the total phospholipid composition of plasma membranes in the brain, and thus it is crucial for maintaining membrane integrity and, consequently, neuronal excitability and synaptic function. Dietary DHA is indispensable for maintaining membrane ionic permeability and the function of transmembrane receptors that support synaptic transmission and cognitive abilities. Omega-3 fatty acids also activate energy-generating metabolic pathways that subsequently affect molecules such as brain-derived neurotrophic factor (BDNF) and insulin-like growth factor 1 (IGF1). IGF1 can be produced in the liver and in skeletal muscle, as well as in the brain, and so it can convey peripheral messages to the brain in the context of diet and exercise. BDNF and IGF1 acting at presynaptic and postsynaptic receptors can activate signalling systems, such as the mitogen-activated protein kinase (MAPK) and calcium/calmodulin-dependent protein kinase II (CaMKII) systems, which facilitate synaptic transmission and support long-term potentiation that is associated with learning and memory. 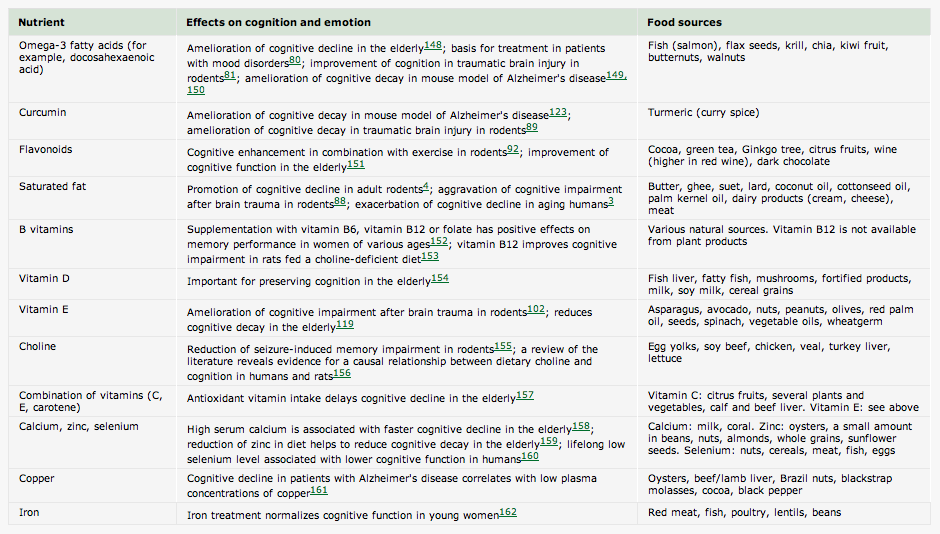 (Click to enlarge table.)
Posted by Deric Bownds at 5:30 AM
Email ThisBlogThis!Share to TwitterShare to FacebookShare to Pinterest
Blog Categories: aging, brain plasticity