Ubiquity of same-sex couplings in nature. 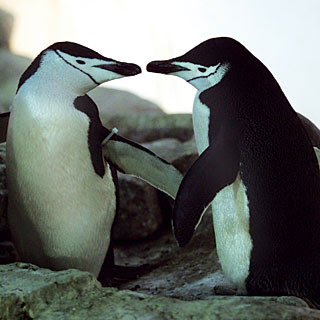 A student has pointed out to me an interesting article in Science American Mind on unorthodox sex in the animal kingdom:

As many as 1,500 species of wild and captive animals have been observed engaging in homosexual activity. Speculations seeking an evolutionary rationale are that animals may engage in same-sex couplings to diffuse social tensions, to better protect their young or to maintain fecundity when opposite-sex partners are unavailable—or simply because it is fun. Bisexuality is a natural state among animals, perhaps Homo sapiens included, despite the sexual-orientation boundaries most people take for granted. In humans the categories of gay and straight are socially constructed.

...homosexuality among some species, including penguins, appears to be far more common in captivity than in the wild. Captivity, scientists say, may bring out gay behaviors in part because of a scarcity of opposite-sex mates. In addition, an enclosed environment boosts an animal’s stress levels, leading to a greater urge to relieve the stress. Some of the same influences may encourage what some researchers call “situational homosexuality” in humans in same-sex settings such as prisons or sports teams.

Driscoll's article continues to describe a number of studies of same-sex partners in wild and captive animals.
Posted by Deric Bownds at 5:30 AM
Email ThisBlogThis!Share to TwitterShare to FacebookShare to Pinterest
Blog Categories: evolution/debate, sex