Our brains are most capable of changing in response to experience when we are young, then this ability abruptly declines into adulthood. Lunghi and Sale do an interesting experiment showing how the plasticity that does remain can be enhanced by exercise. Covering one eye and watching a movie while relaxing in a chair boosts brain responses to the deprived eye. If study participants instead watched the movie while alternating 10 min. intervals of rest and cycling on a stationary bike, this enhancement of the deprived eye became much larger. A figure, followed by their abstract: 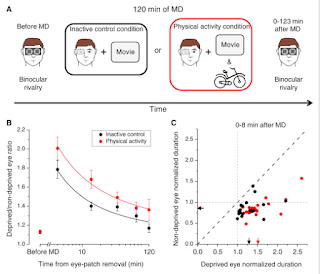 Brain plasticity, defined as the capability of cerebral neurons to change in response to experience, is fundamental for behavioral adaptability, learning, memory, functional development, and neural repair. The visual cortex is a widely used model for studying neuroplasticity and the underlying mechanisms. Plasticity is maximal in early development, within the so-called critical period, while its levels abruptly decline in adulthood. Recent studies, however, have revealed a significant residual plastic potential of the adult visual cortex by showing that, in adult humans, short-term monocular deprivation alters ocular dominance by homeostatically boosting responses to the deprived eye. In animal models, a reopening of critical period plasticity in the adult primary visual cortex has been obtained by a variety of environmental manipulations, such as dark exposure, or environmental enrichment, together with its critical component of enhanced physical exercise. Among these non-invasive procedures, physical exercise emerges as particularly interesting for its potential of application to clinics, though there has been a lack of experimental evidence available that physical exercise actually promotes visual plasticity in humans. Here we report that short-term homeostatic plasticity of the adult human visual cortex induced by transient monocular deprivation is potently boosted by moderate levels of voluntary physical activity. These findings could have a bearing in orienting future research in the field of physical activity application to clinical research.

Posted by Deric Bownds at 3:00 AM
Email ThisBlogThis!Share to TwitterShare to FacebookShare to Pinterest
Blog Categories: aging, brain plasticity