Numerosity is represented in our parietal cortex.

Our primary sensory cortices are arranged topographically, and Harvey et al. have now tested the speculation that numerosity is also organized topographically by using ultrahigh-field functional brain scanning to demonstrate a numerosity map in the parietal cortex: 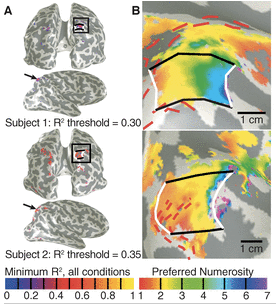 Numerosity, the set size of a group of items, is processed by the association cortex, but certain aspects mirror the properties of primary senses. Sensory cortices contain topographic maps reflecting the structure of sensory organs. Are the cortical representation and processing of numerosity organized topographically, even though no sensory organ has a numerical structure? Using high-field functional magnetic resonance imaging (at a field strength of 7 teslas), we described neural populations tuned to small numerosities in the human parietal cortex. They are organized topographically, forming a numerosity map that is robust to changes in low-level stimulus features. The cortical surface area devoted to specific numerosities decreases with increasing numerosity, and the tuning width increases with preferred numerosity. These organizational properties extend topographic principles to the representation of higher-order abstract features in the association cortex.
Posted by Deric Bownds at 6:50 AM
Email ThisBlogThis!Share to TwitterShare to FacebookShare to Pinterest
Blog Categories: attention/perception