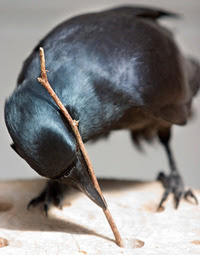 Taylor et al have done some beautiful experiments clearly demonstrating complex cognition in New Caledonian crows, proving that these birds are capable to thinking through their actions, not simply learning through association a series of behaviors and combining them. You really should watch the video in the review by Telis. From that review:

When tasked with reaching a snack in a hole using a short stick on a string and a longer stick trapped in a toolbox, all of the crows pulled it off. The three birds in the training group linked the behaviors they had learned into a new behavior. They freed the short stick from the string, used it to dislodge the long stick, and used the long stick to obtain their food. And all four crows in the innovation group figured out the sequence on their own. One crow in the innovation group stared at the setup for less than 2 minutes and then performed the whole trial correctly on her very first attempt.


Apes, corvids and parrots all show high rates of behavioural innovation in the wild. However, it is unclear whether this innovative behaviour is underpinned by cognition more complex than simple learning mechanisms. To investigate this question we presented New Caledonian crows with a novel three-stage metatool problem. The task involved three distinct stages: (i) obtaining a short stick by pulling up a string, (ii) using the short stick as a metatool to extract a long stick from a toolbox, and finally (iii) using the long stick to extract food from a hole. Crows with previous experience of the behaviours in stages 1–3 linked them into a novel sequence to solve the problem on the first trial. Crows with experience of only using string and tools to access food also successfully solved the problem. This innovative use of established behaviours in novel contexts was not based on resurgence, chaining and conditional reinforcement. Instead, the performance was consistent with the transfer of an abstract, causal rule: ‘out-of-reach objects can be accessed using a tool’. This suggests that high innovation rates in the wild may reflect complex cognitive abilities that supplement basic learning mechanisms.

Posted by Deric Bownds at 5:30 AM
Email ThisBlogThis!Share to TwitterShare to FacebookShare to Pinterest
Blog Categories: animal behavior, memory/learning