Our cooperative behavior is innate. 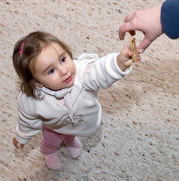 Nicholas Wade notes Tomasello's new book "Why We Cooperate." Helping behavior is observed in children and seems to be innate because it appears very early and before many parents start teaching children the rules of polite behavior. (The pictures shows a young child responding when an adult has dropped something.) Helping behavior can also be seen in infant chimpanzees under the right experimental conditions. Some clips:

Shared intentionality, in Dr. Tomasello’s view, is close to the essence of what distinguishes people from chimpanzees. A group of human children will use all kinds of words and gestures to form goals and coordinate activities, but young chimps seem to have little interest in what may be their companions’ minds...The shared intentionality lies at the basis of human society, Dr. Tomasello argues. From it flow ideas of norms, of punishing those who violate the norms and of shame and guilt for punishing oneself. Shared intentionality evolved very early in the human lineage, he believes, and its probable purpose was for cooperation in gathering food. Anthropologists report that when men cooperate in hunting, they can take down large game, which single hunters generally cannot do. Chimpanzees gather to hunt colobus monkeys, but Dr. Tomasello argues this is far less of a cooperative endeavor because the participants act on an ad hoc basis and do not really share their catch.

An interesting bodily reflection of humans’ shared intentionality is the sclera, or whites, of the eyes. All 200 or so species of primates have dark eyes and a barely visible sclera. All, that is, except humans, whose sclera is three times as large, a feature that makes it much easier to follow the direction of someone else’s gaze. Chimps will follow a person’s gaze, but by looking at his head, even if his eyes are closed. Babies follow a person’s eyes, even if the experimenter keeps his head still...Advertising what one is looking at could be a risk. Dr. Tomasello argues that the behavior evolved “in cooperative social groups in which monitoring one another’s focus was to everyone’s benefit in completing joint tasks.”..This could have happened at some point early in human evolution, when in order to survive, people were forced to cooperate in hunting game or gathering fruit. The path to obligatory cooperation — one that other primates did not take — led to social rules and their enforcement, to human altruism and to language.