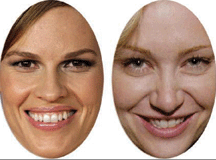 From the random samples section of the Nov. 27 issue of Science:

Can you guess a woman's sexual orientation just from her face? Surprisingly, your guess would be better than flipping a coin....Psychologist Nicholas Rule of Tufts University in Medford, Massachusetts, and colleagues asked 21 college students the same question about 192 photos—cropped to eliminate hair and ears—of gay and straight women from dating Web sites. The undergraduates guessed right 64% of the time and scored better than chance—53%—even when they saw only the women's eyes, the researchers report this month in the Journal of Experimental Social Psychology. In 2008, Rule reported similar results with male faces.

The process appears to be unconscious, Rule says. Subjects were more accurate when told to make snap judgments than when they pondered their decisions. Rule believes subtle differences in facial muscles caused by habitual expressions may be the clue. Previous work has shown that homosexuals tend to adopt facial expressions more typical of the opposite sex. The results show that we know much more about others from snippets of information than we realize, says psychologist David Kenny of the University of Connecticut, Storrs.

Here is the abstract from Rule et al.

Posted by Deric Bownds at 4:25 AM
Email ThisBlogThis!Share to TwitterShare to FacebookShare to Pinterest
Blog Categories: sex