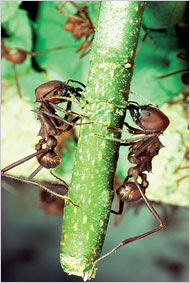 Steve Jones writes an interesting review of E.O. Wilson's latest book, a collaboration with Bert Hölldobler: "THE SUPERORGANISM -The Beauty, Elegance, and Strangeness of Insect Societies"

Social insects have often been co-opted as models of human society. The right uses them to celebrate the power of hierarchy, the left that of community. Bees attract the liberal and optimistic (the spirit of the beehive), ants the conservative and the anything but (the city as ant heap).

Hölldobler and Wilson’s central conceit is that a colony is a single animal raised to a higher level. Each insect is a cell, its castes are organs, its queens are its genitals, the wasps that stung me are an equivalent of an immune system. In the same way, the foragers are eyes and ears, and the colony’s rules of development determine its shape and size. The hive has no brain, but the iron laws of cooperation give the impression of planning. Teamwork pays; in a survey of one piece of Amazonian rain forest, social insects accounted for 80 percent of the total biomass, with ants alone weighing four times as much as all its mammals, birds, lizards, snakes and frogs put together. The world holds as much ant flesh as it does that of humans.

A few simple rules produce what appears to be intelligence, but is in fact entirely mindless. Individuals are automatons. An ant stumbles on a tasty item and brings a piece back to the nest, wandering as it does and leaving a trail of scent. A second ant tracks that pathway back to the source, making random swerves of its own. A third, a fourth, and so on do the same, until soon the busy creatures converge on the shortest possible route, marked by a highway of pheromones. This phenomenon has some useful applications for the social animals who study it. Computer scientists fill their machines with virtual ants and task them with finding their way through a maze, leaving a coded signal as they pass until the fastest route emerges. That same logic helps plan efficient phone networks and the best use of the gates at J.F.K. In the phone system each message leaves a digital “pheromone” as it passes through a node, and the fastest track soon emerges. Swarm intelligence does wondrous things.

Posted by Deric Bownds at 5:30 AM
Email ThisBlogThis!Share to TwitterShare to FacebookShare to Pinterest