If I Were You: Perceptual Illusion of Body Swapping 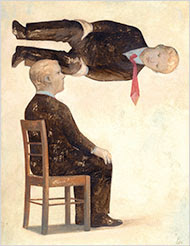 The title of this post is also the title of a fascinating article published in PLoS ONE. When tricked by some simple optical and sensory illusions, we can adopt any other human form, no matter how different, as our own. From Carey's review:

The technique is simple. A subject stands or sits opposite the scientist, as if engaged in an interview. Both are wearing headsets, with special goggles, the scientist’s containing small film cameras. The goggles are rigged so the subject sees what the scientist sees: to the right and left are the scientist’s arms, and below is the scientist’s body...To add a physical element, the researchers have each person squeeze the other’s hand, as if in a handshake. Now the subject can see and “feel” the new body. In a matter of seconds, the illusion is complete. In a series of studies, using mannequins and stroking both bodies’ bellies simultaneously, the Karolinska researchers have found that men and women say they not only feel they have taken on the new body, but also unconsciously cringe when it is poked or threatened.

Here is the abstract from the article:

The concept of an individual swapping his or her body with that of another person has captured the imagination of writers and artists for decades. Although this topic has not been the subject of investigation in science, it exemplifies the fundamental question of why we have an ongoing experience of being located inside our bodies. Here we report a perceptual illusion of body-swapping that addresses directly this issue. Manipulation of the visual perspective, in combination with the receipt of correlated multisensory information from the body was sufficient to trigger the illusion that another person's body or an artificial body was one's own. This effect was so strong that people could experience being in another person's body when facing their own body and shaking hands with it. Our results are of fundamental importance because they identify the perceptual processes that produce the feeling of ownership of one's body.

Posted by Deric Bownds at 5:30 AM
Email ThisBlogThis!Share to TwitterShare to FacebookShare to Pinterest
Blog Categories: attention/perception, self