Destroying memories to strengthen them

Lee reports work with rats showing that the core mechanisms that strengthen memories have more in common with the mechanisms that support memory reconsolidation than those that participate in initial memory storage. Memories are dynamic, rather than static, in nature. The reactivation of a memory through re-exposure to salient training stimuli results in its destabilization, necessitating a restabilization process known as reconsolidation, a disruption of which leads to amnesia. He finds that one normal function of hippocampal memory reconsolidation in rats is to modify the strength of a contextual-fear memory as a result of further learning.

A summary figure from Rudy's review of the article: 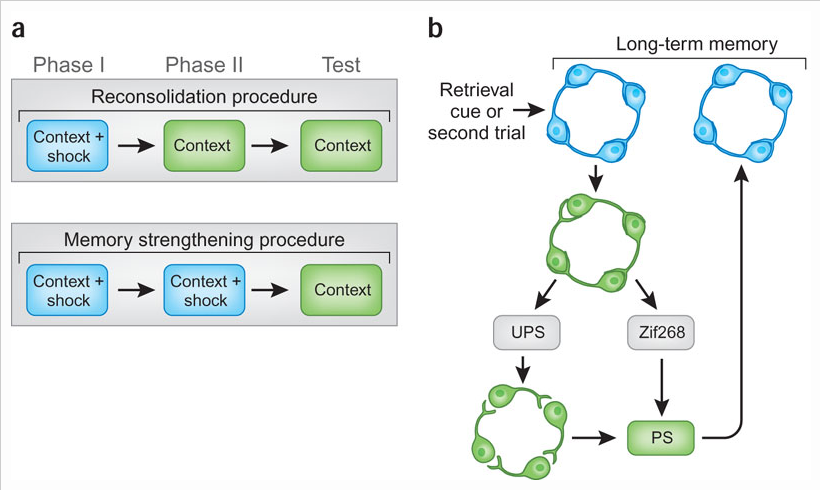 (a) The contextual-fear conditioning procedures that were used to study reconsolidation and memory strengthening are very similar. Note that the only difference between them is that the shock unconditioned stimulus was presented in phase II of the memory strengthening procedure, but the subject was only exposed to the context in the reconsolidation procedure. (b) Exposure to just a retrieval cue or a second conditioning trial will retrieve the established memory trace from long-term memory. This will result in the activation of the UPS, which will uncouple the synapses that support the trace, and the activation of Zip268 and the subsequent production of molecules, protein synthesis (PS), needed to rebuild or strengthen the trace.

The idea that retrieval can disrupt the synaptic basis of an established memory trace is counterintuitive. Nevertheless, the ubiquitin-proteasome system (UPS) has recently been identified as a key component of this process. Ubiquitin tags proteins for degradation and the proteasome degrades them. Retrieval of a contextual-fear memory is associated with polyubiquitinization of important postsynaptic density scaffolding proteins in the hippocampus.If proteolysis is prevented, then the memory trace should not degrade and would not have to be rebuilt from new protein.

Posted by Deric Bownds at 5:30 AM
Email ThisBlogThis!Share to TwitterShare to FacebookShare to Pinterest
Blog Categories: memory/learning