Our expressions of fear and disgust serve specific adaptive purposes

Susskind et al. make some interesting observations that suggest that our facial expressions of fear or disgust are not set by arbitrary social conventions but rather have an evolved Darwinian basis. From Whalen and Kleck's review of this work of this work in the same issue of Nature Neuroscience: 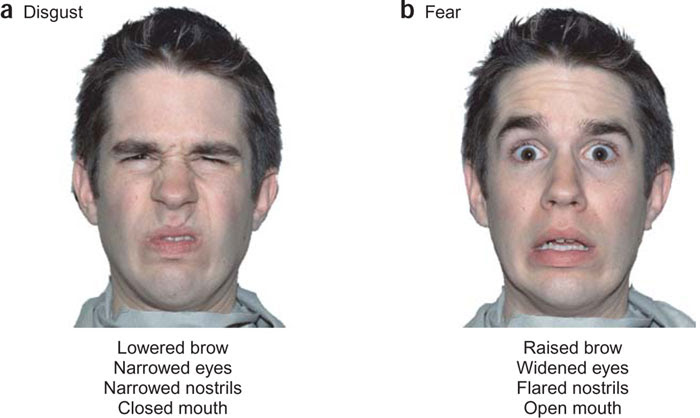 Note how the various parts of the face move in opposite directions in the two expressions, and therefore have opposite effects on sensory intake.

That eye widening should facilitate environmental monitoring is consistent with other data showing that the amygdala has a unique relationship with fearful facial expressions. Indeed, the amygdala uses the widened eyes in fearful expressions as a proxy for the presence of fearful faces, and lesions of the human amygdala result in an inability to properly scan the eye whites in fearful faces. Further, electrical stimulation of the human amygdala results in eye widening and heightened visual scanning of the environment and produces nonspecific arousal responses such as pupil dilation. Neuroimaging studies have shown that the amygdala is sensitive to the pupil size of others. Taken together, these findings support the hypothesized role of the amygdala in potentiating sensory information processing to facilitate learning about the predi. More generally, these results suggest that your amygdala is sensitive to the very facial responses in others that it controls in you.

If the amygdala has shown an affinity for the facial expression of fear, then the analogous brain region for disgusted expressions would be the insular cortex. Neuroimaging, as well as depth electrode recording studies, show that human insular cortex responds to disgusted faces, and damage to the insula produces deficits in the recognition of disgusted faces11. Furthermore, insular pathology in Huntington's disorder is associated with a decreased disgust response and a similar recognition deficit of disgust. Although it is tempting to divide duties for the amygdala and insular cortex between fear and disgust and to suggest that they represent unique neural substrates for their processing, other work suggests that these reciprocally connected regions will interact along dimensions such as arousal, valence and/or attention, dimensions that cross the stark boundary between these two expression categories.

Posted by Deric Bownds at 5:30 AM
Email ThisBlogThis!Share to TwitterShare to FacebookShare to Pinterest
Blog Categories: evolution/debate, evolutionary psychology, fear/anxiety/stress