Meyler et al. have published an interesting study in Neuropsychologia showing brain plasticity during the remedial instruction of poor readers:

This study used fMRI to longitudinally assess the impact of intensive remedial instruction on cortical activation among 5th grade poor readers during a sentence comprehension task. The children were tested at three time points: prior to remediation, after 100 h of intensive instruction, and 1 year after the instruction had ended. Changes in brain activation were also measured among 5th grade good readers at the same time points for comparison. The central finding was that prior to instruction, the poor readers had significantly less activation than good readers bilaterally in the parietal cortex. Immediately after instruction, poor readers made substantial gains in reading ability, and demonstrated significantly increased activation in the left angular gyrus and the left superior parietal lobule. Activation in these regions continued to increase among poor readers 1 year post-remediation, resulting in a normalization of the activation. These results are interpreted as reflecting changes in the processes involved in word-level and sentence-level assembly. Areas of overactivation were also found among poor readers in the medial frontal cortex, possibly indicating a more effortful and attentionally guided reading strategy. 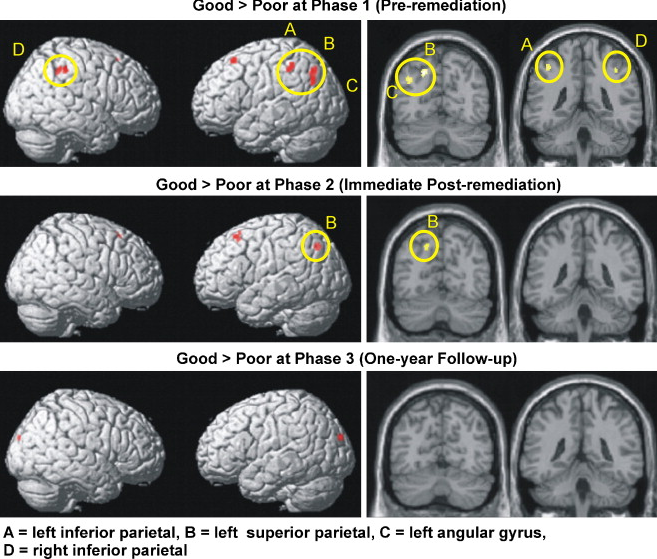 Posted by Deric Bownds at 5:30 AM
Email ThisBlogThis!Share to TwitterShare to FacebookShare to Pinterest
Blog Categories: brain plasticity, language, memory/learning