New software for your iPhone to make you smart 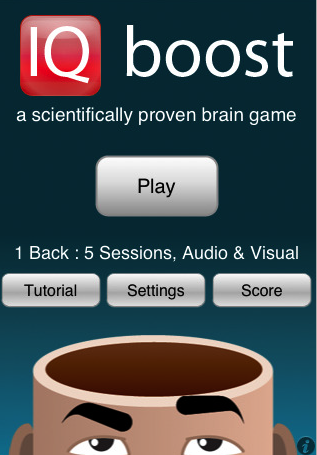 In a previous post I have mentioned the work of Jaeggi et al. who have shown that fluid intelligence, the ability to reason and to solve new problems independently of previously acquired knowledge, can be improved by training of working memory. Now their basic experimental paradigm is available as an iPhone app costing six bucks. I'm playing with it, and it has hooked me, unlike the web based stuff I have described previously. Here is a more thorough presentation of the paradigm of Jaeggi et al. than I gave in the original post:

In this task, participants see two series of stimuli that are synchronously presented at the rate of 3 s per stimulus. One string of stimuli consists of single letters whereas the other consists of individual spatial locations marked on a screen. The task is to decide for each string whether the current stimulus matched the one that was presented n items back in the series. The value of n varies from one block of trials to another, with adjustments made continuously for each participant based on performance. As performance improves, n increments by one item; as it worsens, n decrements by one item. Thus, the task changes adaptively so that it always remained demanding, and this demand is tailored to individual participants. This form of training engages processes required for the management of two simultaneous tasks; it engaged executive processes required for each task; and it discouraged the development of task-specific strategies and the engagement of automatic processes because of the variation in n and because of the inclusion of two different classes of stimuli.

The n-back task that is used as the training task, illustrated for a 2-back condition. The letters are presented auditorily at the same rate as the spatial material is presented visually.

Posted by Deric Bownds at 5:45 AM
Email ThisBlogThis!Share to TwitterShare to FacebookShare to Pinterest
Blog Categories: memory/learning, technology