This article from Kelly et al. in PLoS One biology is worth a look...here are some clips: 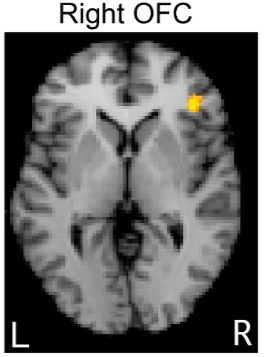 Media depictions of violence, although often claimed to induce viewer aggression, have not been shown to affect the cortical networks that regulate behavior...Using functional magnetic resonance imaging (fMRI), we found that repeated exposure to violent media, but not to other equally arousing media, led to both diminished response in right lateral orbitofrontal cortex (right ltOFC) and a decrease in right ltOFC-amygdala interaction. Reduced function in this network has been previously associated with decreased control over a variety of behaviors, including reactive aggression. Indeed, we found reduced right ltOFC responses to be characteristic of those subjects that reported greater tendencies toward reactive aggression. Furthermore, the violence-induced reduction in right ltOFC response coincided with increased throughput to behavior planning regions...These novel findings establish that even short-term exposure to violent media can result in diminished responsiveness of a network associated with behaviors such as reactive aggression.

Posted by Deric Bownds at 6:30 AM
Email ThisBlogThis!Share to TwitterShare to FacebookShare to Pinterest
Blog Categories: acting/choosing, fear/anxiety/stress, morality