Why the rich behave badly... "disinhibition" 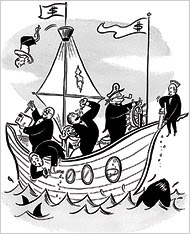 Richard Conniff writes an OpEd piece in the 4/4/07 NY Times (PDF here) pointing out the work of UC Berkely psychologist Dacher Keltner and others who study the effect of power on social perception and behavior. Their work suggests that elevated power leads to behavioral disinhibition and reduced vigilance. They find that ideological partisans with power construe their dispute in more stereotypical, polarized fashion, that elevated social status leads to disinhibited social behavior, and that power, whether derived from group status or experimental manipulation, relates to the experience of increased positive emotion and reduced negative emotion.

In what Conniff calls the "Cookie Monster Experiment" (a much milder version of the Stanford Prison Experiment) Keltner:

...took groups of three ordinary volunteers and randomly put one of them in charge. Each trio had a half-hour to work through a boring social survey. Then a researcher came in and left a plateful of precisely five cookies. Care to guess which volunteer typically grabbed an extra cookie? The volunteer who had randomly been assigned the power role was also more likely to eat it with his mouth open, spew crumbs on partners and get cookie detritus on his face and on the table.

It reminded the researchers of powerful people they had known in real life. One of them, for instance, had attended meetings with a magazine mogul who ate raw onions and slugged vodka from the bottle, but failed to share these amuse-bouches with his guests. Another had been through an oral exam for his doctorate at which one faculty member not only picked his ear wax, but held it up to dandle lovingly in the light.

...that getting power causes people to focus so keenly on the potential rewards, like money, sex, public acclaim or an extra chocolate-chip cookie — not necessarily in that order, or frankly, any order at all, but preferably all at once — that they become oblivious to the people around them.

Indeed, the people around them may abet this process, since they are often subordinates intent on keeping the boss happy. So for the boss, it starts to look like a world in which the traffic lights are always green (and damn the pedestrians). Professor Keltner and his fellow researchers describe it as an instance of “approach/inhibition theory” in action: As power increases, it fires up the behavioral approach system and shuts down behavioral inhibition.

Posted by Deric Bownds at 8:45 AM
Email ThisBlogThis!Share to TwitterShare to FacebookShare to Pinterest
Blog Categories: culture/politics, emotion, social cognition