Two groups of subjects trained on a motor-skill task using their left hand – a paradigm known to result in overnight plastic changes in the contralateral, right motor cortex. Both groups trained in the morning and were tested 8 hr later, with one group obtaining a 60–90 minute intervening midday nap, while the other group remained awake. At testing, subjects that did not nap showed no significant performance improvement, yet those that did nap expressed a highly significant consolidation enhancement. Within the nap group, the amount of offline improvement showed a significant correlation with the global measure of stage-2 NREM sleep. However, topographical sleep spindle analysis revealed more precise correlations. Specifically, when spindle activity at the central electrode of the non-learning hemisphere (left) was subtracted from that in the learning hemisphere (right), representing the homeostatic difference following learning, strong positive relationships with offline memory improvement emerged–correlations that were not evident for either hemisphere alone. 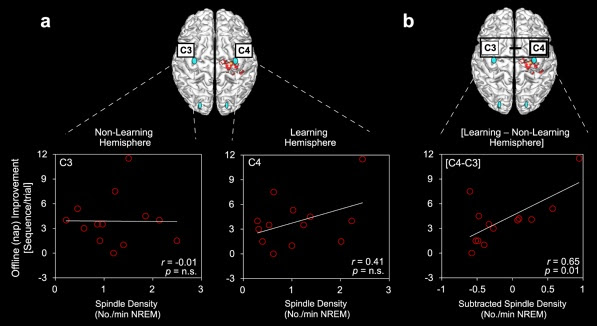 Posted by Deric Bownds at 6:45 AM
Email ThisBlogThis!Share to TwitterShare to FacebookShare to Pinterest
Blog Categories: memory/learning, sleep