The Myth of Mirror Neurons?

In an article in a special issue of Slate devoted to the brain (well worth checking over...I'll give some links to articles in the Slate issue in subsequent posts), Gopnik argues that excitement over the discovery of mirror neurons in our brains (the subject of a number of blog posts and my lecture posted earlier...) is generating a new scientific myth. Like a traditional myth, it captures intuitions about the human condition through vivid metaphors. Some clips:

It didn't take long for scientists and science writers to speculate that mirror neurons might serve as the physiological basis for a wide range of social behaviors, from altruism to art appreciation. Headlines like "Cells That Read Minds" or "How Brain's 'Mirrors' Aid Our Social Understanding" tapped into our intuitions about connectedness. Maybe this cell, with its mellifluous name, gives us our special capacity to understand one another—to care, to learn, and to communicate. Could mirror neurons be responsible for human language, culture, empathy, and morality?. 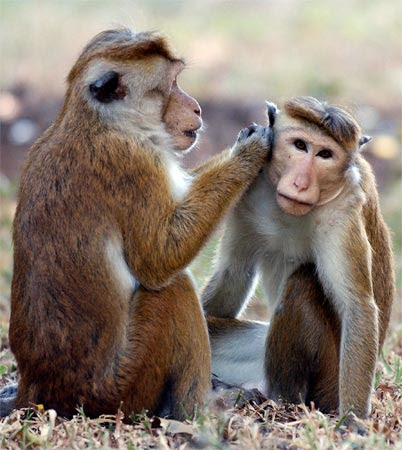 The evidence for individual mirror neurons comes entirely from studies of macaque monkeys. That's because you can't find these cells without inserting electrodes directly (though painlessly) into individual neurons in the brains of living animals. These studies haven't been done with chimpanzees, let alone humans.

The trouble is that macaque monkeys don't have language, they don't have culture, and they don't understand other animals' minds. In fact, careful experiments show that they don't even systematically imitate the actions of other monkeys—and they certainly don't imitate in the prolific way that the youngest human children do. Even chimpanzees, who are much more cognitively sophisticated than macaques, show only very limited abilities in these areas. The fact that macaques have mirror neurons means that these cells can't by themselves explain our social behavior.

Posted by Deric Bownds at 7:25 AM
Email ThisBlogThis!Share to TwitterShare to FacebookShare to Pinterest
Blog Categories: mirror neurons, social cognition