In Fort Lauderdale, FL, and now in Austin TX, I have organized discussion groups that meet regularly to discuss new topics and ideas. The Florida group named itself “The Roundtable” while the Austin group calls itself the “Austin Rainbow Forum.” The topic for the next Austin meeting, appropriate to the age of Trump, is “Self-care and finding personal peace in today's socio-political climate.”

The topic reminded me of a relevant talk I worked up some years ago titled “Are you holding your breath? - Structures of arousal and calm.” The talk describes downstairs and upstairs systems in our brain that regulate our arousal.

I thought I would show here a summary of part IV of that talk (parts of the summary, absent the context of the whole talk will seem a bit cryptic), and also show edited text that goes with part B. 1. dealing with the importance of our self construal in how we deal with stress. The link to the talk given above takes you to the whole package… 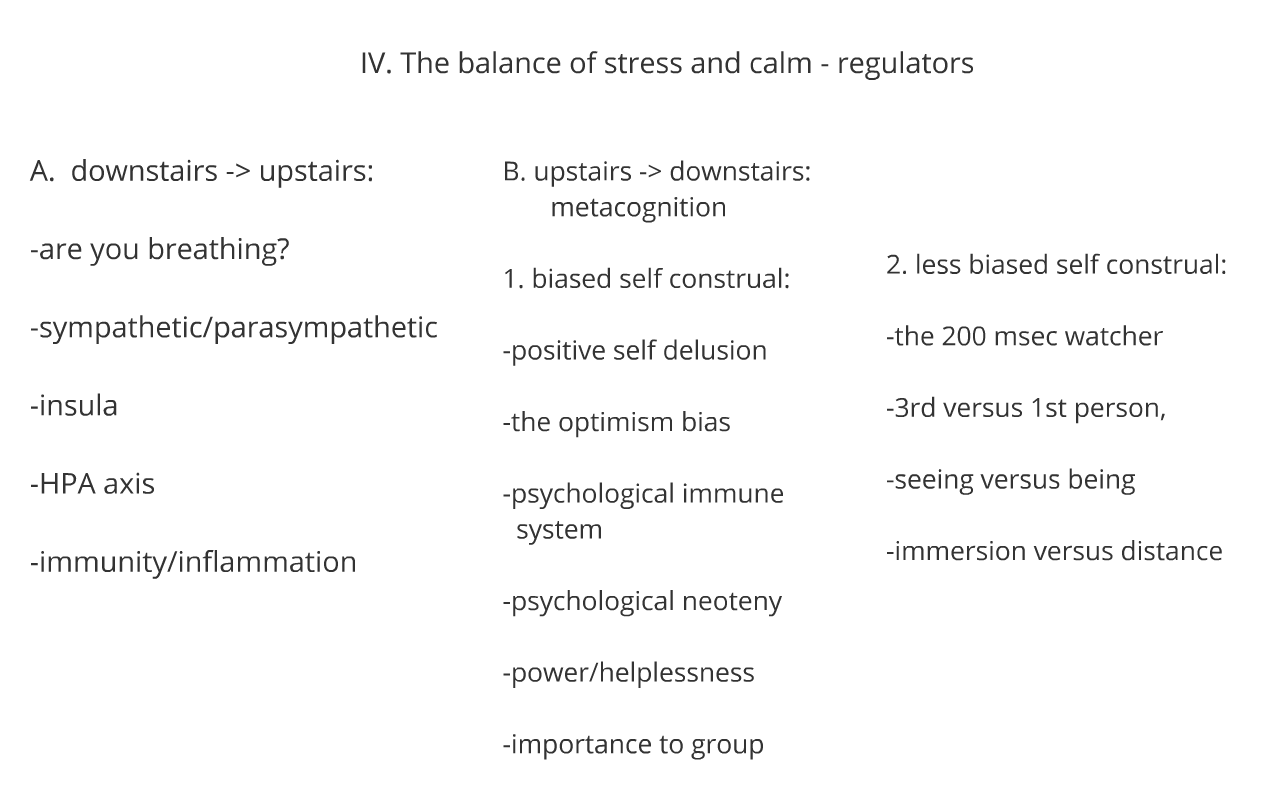 There are two broad categories of upstairs to downstairs, or top down regulators,  one emphasizing biased self construal (B. 1., middle list to the left) the other attempting more unbiased self observation (B2, right list) So, to start with the first:

It seems clear that most of us are completely unequipped to function without a vast array of positive delusions about our abilities, our futures, etc.  There is a large literature on this. Dan Dennett and McKay have just written a treatise in Brain and Behavioral Science that examines possible evolutionary rationales for mistaken beliefs, bizarre delusions, instances of self-deception, etc., they conclude that  only positive illusions meet their criteria for being adaptive.

Johnson and his colleagues have produced an evolutionary model suggesting that overconfidence maximizes individual fitness and that populations tend to become overconfident as long as benefits from contested resources are sufficiently large compared with the cost of competition. Unbiased strategies are only stable under limited conditions.  Maybe this is why overconfidence prevails, even as it contributes to market bubbles, financial collapses, policy failures, disasters and costly wars.

Most people report they are above average drivers and typically place themselves higher many scales than they really are. 70% of high schoolers rate, and, according to themselves,  a spectacular 94% of college professors possess teaching abilities that are above average.

In predicting the future we overestimate the likelihood of positive events, and underestimate the likelihood of negative one. Underestimate our chances getting divorced, being in a car accident, having cancer. We expect to live longer, be more successful, have more talented kids,  than objective measures would warrant. This is officially named the optimism bias, and it is one of the most consistent, prevalent, and robust biases documented in psychology and behavioral economics.

People update their beliefs more in response to information that is better than expected than to information that is worse,  and Dolan’s lab has actually found this reflected in activity in the prefrontal area that tracks estimation errors.  Highly optimistic individuals show reduced tracking of estimation errors that called for negative updates.   In other words, optimism is tied to a selective update failure and diminished neural coding of undesirable information regarding the future.

Our experience of the world is a mixture of stark reality and comforting illusion. We can't spare either. We might think of people as having a psychological immune system [on prezi list] that defends the mind against unhappiness like the physical immune system defends the body from illness.  Defense needs to be good, but not too good - somewhere between “I’m perfect and everyone is against me” and “I’m a loser and I ought to be dead.”

We engage in a wide array of mental gymnastics to salvage our self-esteem rather than owning up to our mistakes.    Recall the famous “mistakes were made” comment regarding the U.S. charging into the Iraq war.

One way to negotiate aging is to deny it, not spend give a lot of mental space to self fulling personal or societal expectations of decline. You can argue that psychological neoteny, retaining youthful attitudes and behaviors, is quite adaptive, especially in old folks, because it might help preserve plasticity of mind and personality that is very useful in ever-changing modern life.

Achievement is usually enhanced by having an inflated view of one’s abilities, which can also lead to working harder to live up to this enhanced self-image.  Students who exaggerate their current grade point averages are more motivated towards education and have higher calming parasympathetic activation when discussing academics.

If we generate a construal of ourselves as powerful, rested, and competent this can dial the blood pressure and sympathetics down and parasympathetics up.   A self construal of being powerless has the opposite effect.  Changes in immune status and inflammatory processes correlate with this transition.  Actually, our brain links to our immune system via the vagus nerve.

One's role in a hierarchy, or relative position in a gradient of personal helplessness to power, is a fundamental determinant of individual well being in both animal and human societies. Subordinate individuals show more chronic stress, anxiety-like behaviors, and susceptibility to disease.  This was most strikingly shown in a well known study on British civil servants.

So, as a summary: self deception can be useful and adaptive as long as it is not wildly inappropriate.  It can enhance vitality and motivate performance, yet enough realism should be retained to avoid straining to do what can not be done.

Posted by Deric Bownds at 3:00 AM
Email ThisBlogThis!Share to TwitterShare to FacebookShare to Pinterest
Blog Categories: culture/politics, fear/anxiety/stress