The evolution of gender effects on empathy.

Christov-Moore et al. offer a review making the point that differences in the capacity for empathy between males and females have deep evolutionary and developmental roots, in addition to any cultural expectations about gender roles. The review references a graphic summary of brain areas involved in experience sharing which I also pass on.


• Sex differences in empathy have phylogenetic and ontogenetic roots in biology.

• As primary caregivers females evolved adaptations to be sensitive to infants’ signals.

• Sex differences in empathy appear to be consistent and stable across the lifespan.

• Males show greater recruitment of brain areas for the control of cognitive empathy.


Evidence suggests that there are differences in the capacity for empathy between males and females. However, how deep do these differences go? Stereotypically, females are portrayed as more nurturing and empathetic, while males are portrayed as less emotional and more cognitive. Some authors suggest that observed gender differences might be largely due to cultural expectations about gender roles. However, empathy has both evolutionary and developmental precursors, and can be studied using implicit measures, aspects that can help elucidate the respective roles of culture and biology. This article reviews evidence from ethology, social psychology, economics, and neuroscience to show that there are fundamental differences in implicit measures of empathy, with parallels in development and evolution. Studies in nonhuman animals and younger human populations (infants/children) offer converging evidence that sex differences in empathy have phylogenetic and ontogenetic roots in biology and are not merely cultural byproducts driven by socialization. We review how these differences may have arisen in response to males’ and females’ different roles throughout evolution. Examinations of the neurobiological underpinnings of empathy reveal important quantitative gender differences in the basic networks involved in affective and cognitive forms of empathy, as well as a qualitative divergence between the sexes in how emotional information is integrated to support decision making processes. Finally, the study of gender differences in empathy can be improved by designing studies with greater statistical power and considering variables implicit in gender (e.g., sexual preference, prenatal hormone exposure). These improvements may also help uncover the nature of neurodevelopmental and psychiatric disorders in which one sex is more vulnerable to compromised social competence associated with impaired empathy.

The summary graphic by Zaki and Ochsner : 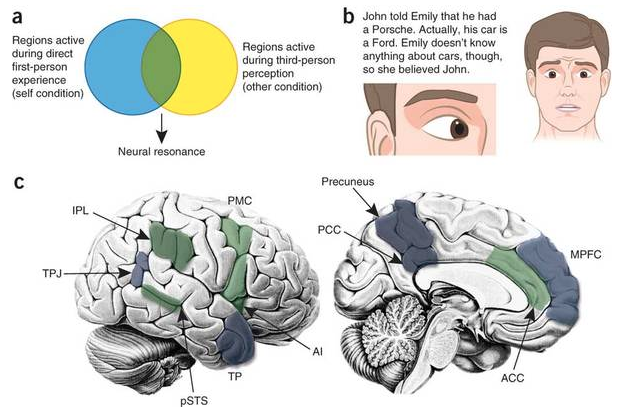