Here is a fascinating piece of work from Pärnamets et al.:


Eye gaze is a window onto cognitive processing in tasks such as spatial memory, linguistic processing, and decision making. We present evidence that information derived from eye gaze can be used to change the course of individuals’ decisions, even when they are reasoning about high-level, moral issues. Previous studies have shown that when an experimenter actively controls what an individual sees the experimenter can affect simple decisions with alternatives of almost equal valence. Here we show that if an experimenter passively knows when individuals move their eyes the experimenter can change complex moral decisions. This causal effect is achieved by simply adjusting the timing of the decisions. We monitored participants’ eye movements during a two-alternative forced-choice task with moral questions. One option was randomly predetermined as a target. At the moment participants had fixated the target option for a set amount of time we terminated their deliberation and prompted them to choose between the two alternatives. Although participants were unaware of this gaze-contingent manipulation, their choices were systematically biased toward the target option. We conclude that even abstract moral cognition is partly constituted by interactions with the immediate environment and is likely supported by gaze-dependent decision processes. By tracking the interplay between individuals, their sensorimotor systems, and the environment, we can influence the outcome of a decision without directly manipulating the content of the information available to them. 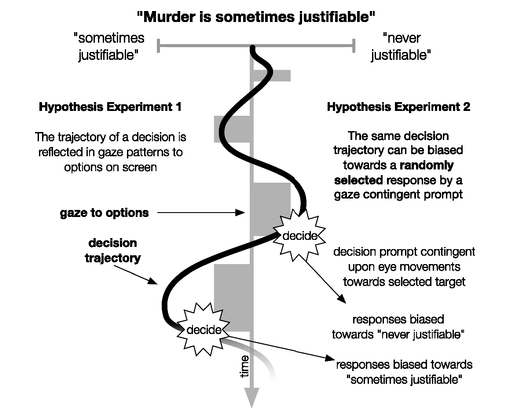 We hypothesized that participants’ eye gaze reveals their decision process owing to general coupling between sensorimotor decision processes. By using a gaze-contingent probe and selecting when a decision is prompted the resulting choice can be biased toward a randomly predetermined option.

Posted by Deric Bownds at 3:00 AM
Email ThisBlogThis!Share to TwitterShare to FacebookShare to Pinterest
Blog Categories: acting/choosing, morality