Want to remember something? Have some coffee!

Here is the brief abstract from Borota et al., followed by a graphic summary of the results offered by Favila and Kuhl: 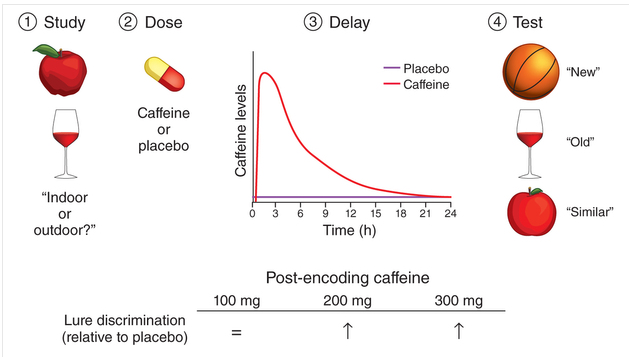 Figure: Effect of post-encoding caffeine on memory. On day 1, subjects viewed a series of images of everyday objects and made a judgment about whether each image was likely to be found indoors or outdoors. Immediately after completing this task, they took either caffeine or placebo. Measured caffeine levels fully returned to baseline by the next day. On day 2, subjects were given a surprise memory test. Subjects viewed a series of images and decided whether each image was new (not seen on day 1), old (identical to one of the images from day 1) or similar (a different exemplar of one of the images seen on day 1). The probability of correctly labeling similar images as similar (instead of old) was reflected by a lure discrimination index that corrected for potential response bias. Subjects who received 200 or 300 mg of caffeine after the study period on day 1 showed enhanced lure discrimination on day 2 compared with subjects who received placebo. At 100 mg, caffeine did not enhance test performance, nor did caffeine administered just before the memory test (not shown).

Posted by Deric Bownds at 5:29 AM
Email ThisBlogThis!Share to TwitterShare to FacebookShare to Pinterest
Blog Categories: memory/learning