How our brain cortex receives information about the world

This post is for that subset of MindBlog readers interested in details of brain wiring. Constantinople and Bruno have upset a basic dogma taught to budding neuroscientists (like myself, in the 1960s) - that (from the Science editor's summary):


...there is a “canonical microcircuit” in the neo cortex, in which information is transformed as excitation spreads serially along connections from thalamus, to cortical layer 4, then to layers 2/3, to layers 5/6, and finally to other brain regions. Each cortical layer is thought to transform sensory signals to extract behaviorally relevant information. Now, from Constantinople and Bruno...In vivo whole-cell recordings revealed that sensory stimuli activate neurons in deep cortical layers simultaneously to those in layer 4 and that a large number of thalamic neurons converge onto deep pyramidal neurons, possibly allowing sensory information to completely bypass upper layers. Temporary blockade of layer 4 revealed that synaptic input to deep cortical layers derived entirely from the thalamus and not at all from upper cortical layers. This thalamically derived synaptic input reliably drove pyramidal neurons in layer 5 to discharge action potentials in the living animal. These deep layer neurons project to numerous higher-order brain regions and could directly mediate behavior.

Here is a summary graphic from the paper: 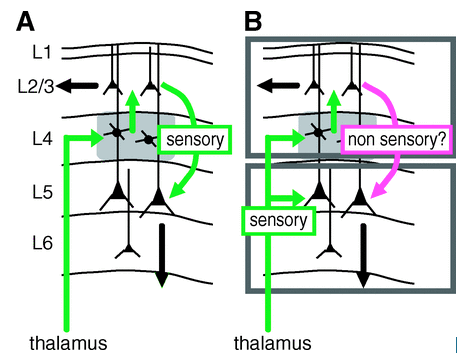 (A) In the conventional serial model, sensory information is transformed as excitation spreads from thalamus to L4 to L2/3 to L5/6 along the densest axonal pathways (green). (B) In the bistratified model, thalamus copies sensory information to both an upper stratum (L4 and L2/3) and a lower stratum (L5/6), which differ in coding properties and downstream target

s.
Posted by Deric Bownds at 5:58 AM
Email ThisBlogThis!Share to TwitterShare to FacebookShare to Pinterest
Blog Categories: attention/perception, vision