Inflammation links ageing to the brain.

Gabuzda et al. do a nice review of work by Zhang et al., that suggests that manipulation of hypothalamus regulation, and especially levels of the hormone GnRH (gonadotropin-releasing hormone) might abrogate some effects of ageing.  I want to pass on several clips from their summary:


One of the least-understood aspects of ageing is its coordinated and stereotyped progression in all organ systems. Although researchers have long suspected that the brain orchestrates systemic ageing, compelling evidence of this in mammals has been lacking. Furthermore, we have had no clear understanding of how ageing is affected by inflammation, which is a hallmark of age-related diseases such as diabetes, cardiovascular disease, arthritis and Alzheimer's disease. Zhang et al. help to make this connection by documenting the integration of inflammatory responses with systemic control of ageing by the hypothalamus — a part of the brain that controls growth, reproduction and metabolism. 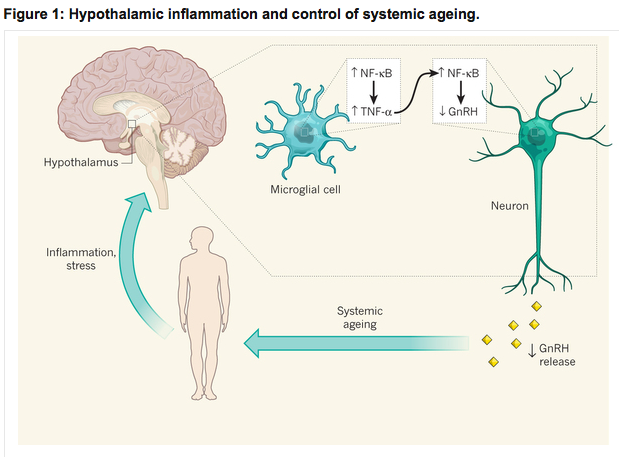 FIGURE - Zhang et al. report that inflammation leads to activation of the signalling molecule NF-κB in the hypothalamus of the brain, and suggest that this contributes to the control of systemic ageing. They show that NF-κB activation in hypothalamic cells called microglia results in production of TNF-α, which, in turn, stimulates NF-κB activity in nearby neurons. This signalling results in epigenetic repression of the gene that encodes gonadotropin-releasing hormone (GnRH), leading to reduced GnRH release from the neurons, which is associated with multiple physiological changes related to ageing, including bone loss, skin atrophy, muscle weakness and memory loss. This pathway might also mediate the effects of a variety of environmental and physiological stressors.

'Inflammageing' describes the close relationship between low-grade chronic inflammation and ageing that has been linked to a wide spectrum of age-related disorders in various organs, including the brain6. Healthy ageing and longevity could relate, in part, to reduced levels of inflammation or strong protective mechanisms that guard against adverse effects of chronic inflammation. Conversely, genetic and environmental factors that promote inflammation or disrupt the mechanisms involved in reducing inflammation seem to confer increased susceptibility to 'accelerated ageing' and age-related disorders such as insulin resistance, metabolic disorders and cardiovascular disease7. Accelerated ageing typically involves multiple organ systems, although the effects in some organs might not be seen as clinical symptoms.

In addition to the classical activity of GnRH in regulating the release of sex steroids involved in development and reproduction (oestrogens and progesterone in females and androgens in males), the hormone might also mediate other functions12. Notably, Zhang et al. found that when mice were administered GnRH, it abrogated ageing effects and increased the production of new neurons in the hypothalamus and hippocampus (a part of the brain that regulates memory). By contrast, sex steroids did not have these anti-ageing effects. A decrease in gonadal sex steroids is a well-established marker of ageing, but many other hormonal changes occur as well; and some of these age-regulated hormones (such as dehydroepiandrosterone) also regulate inflammation and other immune responses. Thus, interplay between the hormonal and immune systems occurs at multiple levels.

How might hypothalamic regulation of ageing have evolved? Chronic inflammation arises from many kinds of insult, from acute infection to genomic instability. The concept that the hypothalamus can sense inflammation through immune pathways is a new one; just as the hypothalamus responds to nutrient status, its response to inflammation may enable the organism to rapidly adapt to physiological perturbations. Turning down the hypothalamic release of modulators such as GnRH to prevent reproduction and reduce growth may be evolutionarily advantageous during acute infection, injury or deprivation. Although this would have been adaptive for our shorter-lived ancestors, it may accelerate ageing in older individuals and have become apparent now that we live longer. This idea also raises the intriguing possibility that hypothalamic regulation could be therapeutically manipulated to have broad effects on the ageing process and age-related pathology.

Posted by Deric Bownds at 11:05 AM
Email ThisBlogThis!Share to TwitterShare to FacebookShare to Pinterest
Blog Categories: aging