A group of collaborators from the University of Oxford and Innsbruck Medical University have published an observation that simple transcranial random noise stimulation (TRNS) of the bilateral (both sides of the brain) dorsolateral prefrontal cortex (DLPFC) applied during cognitive training over five days causes improvement in learning and performance of complex arithmetic tasks (both calculation and drill leaning) that still persist on testing 6 months later. This correlates with long lasting oxygenated blood flow changes measured by near-infrared spectroscopy that suggests more efficient neurovascular coupling within the left DLPFC. Here is their complete abstract:


Noninvasive brain stimulation has shown considerable promise for enhancing cognitive functions by the long-term manipulation of neuroplasticity. However, the observation of such improvements has been focused at the behavioral level, and enhancements largely restricted to the performance of basic tasks. Here, we investigate whether transcranial random noise stimulation (TRNS) can improve learning and subsequent performance on complex arithmetic tasks. TRNS of the bilateral dorsolateral prefrontal cortex (DLPFC), a key area in arithmetic , was uniquely coupled with near-infrared spectroscopy (NIRS) to measure online hemodynamic responses within the prefrontal cortex. Five consecutive days of TRNS-accompanied cognitive training enhanced the speed of both calculation- and memory-recall-based arithmetic learning. These behavioral improvements were associated with defined hemodynamic responses consistent with more efficient neurovascular coupling within the left DLPFC. Testing 6 months after training revealed long-lasting behavioral and physiological modifications in the stimulated group relative to sham controls for trained and nontrained calculation material. These results demonstrate that, depending on the learning regime, TRNS can induce long-term enhancement of cognitive and brain functions. Such findings have significant implications for basic and translational neuroscience, highlighting TRNS as a viable approach to enhancing learning and high-level cognition by the long-term modulation of neuroplasticity.

For those of you who might well ask "How exactly is TRNS done?" here is a clip from their experimental procedures section. The photograph suggests a rather imposing device!: 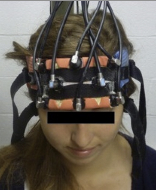 Subjects received TRNS while performing the learning task each day. Two electrodes (5 cm × 5 cm) were positioned over areas of scalp corresponding to the DLPFC (F3 and F4, identified in accordance with the international 10-20 EEG procedure; see the figure). Electrodes were encased in saline-soaked synthetic sponges to improve contact with the scalp and avoid skin irritation. Stimulation was delivered by a DC-Stimulator-Plus device (DC-Stimulator-Plus, neuroConn). Noise in the high-frequency band (100–600Hz) was chosen as it elicits greater neural excitation than lower frequency stimulation. For the TRNS group, current was administered for 20 min, with 15 s increasing and decreasing ramps at the beginning and end, respectively, of each session of stimulation. In the sham group current was applied for 30 s after upward ramping and then terminated.

Posted by Deric Bownds at 5:24 AM
Email ThisBlogThis!Share to TwitterShare to FacebookShare to Pinterest
Blog Categories: brain plasticity, memory/learning