Neuroimaging our self esteem - be happy!

There are more papers coming out on brain correlates of whatever aspect of our behaviors you care to name than anyone could possibly keep up with. I have the ‘my eyes glaze over’ experience in just scanning tables of contents of the relevant journals. Occasionally an item pops out that grabs my attention, such as this one (open access) on imaging brain correlates of self esteem. The drums continue to beat (see this book review) on how important a positive self image and an "Up" attitude are for health and longevity. Maybe someone will develop some kind of magnetic zapper that we can shoot ourselves up with whenever whenever we are feeling like a piece of …...


Although neuroimaging studies strongly implicate the medial prefrontal cortex (ventral and dorsal), cingulate gyrus (anterior and posterior), precuneus and temporoparietal cortex in mediating self-referential processing (SRP), little is known about the neural bases mediating individual differences in valenced SRP, that is, processes intrinsic to self-esteem. This study investigated the neural correlates of experimentally engendered valenced SRP via the Visual–Verbal Self-Other Referential Processing Task in 20 women with fMRI. Participants viewed pictures of themselves or unknown other women during separate trials while covertly rehearsing ‘I am’ or ‘She is’, followed by reading valenced trait adjectives, thus variably associating the self/other with positivity/negativity. Response within dorsal and ventral medial prefrontal cortex, cingulate cortex and left temporoparietal cortex varied with individual differences in both pre-task rated self-descriptiveness of the words, as well as task-induced affective responses. Results are discussed as they relate to a social cognitive and affective neuroscience view of self-esteem. 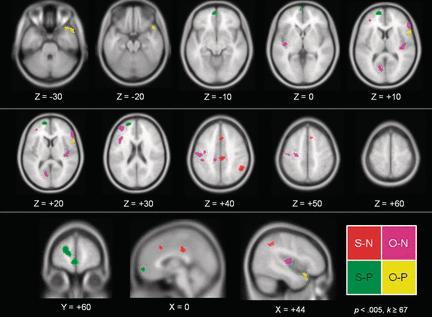 .... stimulus presentations were blocked in terms of the conditions Reference (Self vs Other, i.e. photographs) and Valence (words), creating four trial types: self-negative (S-N), self-positive (S-P), other-negative (O-N) and other-positive (O-P). Participants were not instructed that they ‘should try to press the buttons as fast as possible’ as is often done in social cognition experiments. In contrast, participants were instructed only to press the buttons ‘so that we can assess afterwards whether you are paying attention to and completing the task’. This passive orientation was intended to focus attention towards introspection and interoception with participants reminded repeatedly of the importance of ‘paying close attention to how you are feeling throughout the different parts of the task’.

Posted by Deric Bownds at 6:31 AM
Email ThisBlogThis!Share to TwitterShare to FacebookShare to Pinterest
Blog Categories: consciousness, happiness, technology