Penis size and male attractiveness - the most read article in The Proceedings of the National Academy!

I finally had to pass this on.... When I check out the table of contents for new issues of the Proceedings of the National Academy of Science, the right hand column of the page lists most read and most cited articles. For weeks I've been noting that the most read article is "Penis size interacts with body shape and height to influence male attractiveness." I've been trying to avoid it, assuming another evolutionary psychology fairy tale...but, I did have a look. To not deprive MindBlog readers of this gem, I pass on the abstract and one illustration:


Compelling evidence from many animal taxa indicates that male genitalia are often under postcopulatory sexual selection for characteristics that increase a male’s relative fertilization success. There could, however, also be direct precopulatory female mate choice based on male genital traits. Before clothing, the nonretractable human penis would have been conspicuous to potential mates. This observation has generated suggestions that human penis size partly evolved because of female choice. Here we show, based upon female assessment of digitally projected life-size, computer-generated images, that penis size interacts with body shape and height to determine male sexual attractiveness. Positive linear selection was detected for penis size, but the marginal increase in attractiveness eventually declined with greater penis size (i.e., quadratic selection). Penis size had a stronger effect on attractiveness in taller men than in shorter men. There was a similar increase in the positive effect of penis size on attractiveness with a more masculine body shape (i.e., greater shoulder-to-hip ratio). Surprisingly, larger penis size and greater height had almost equivalent positive effects on male attractiveness. Our results support the hypothesis that female mate choice could have driven the evolution of larger penises in humans. More broadly, our results show that precopulatory sexual selection can play a role in the evolution of genital traits. 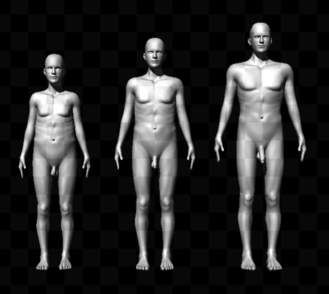 Posted by Deric Bownds at 9:51 AM
Email ThisBlogThis!Share to TwitterShare to FacebookShare to Pinterest
Blog Categories: human evolution, sex