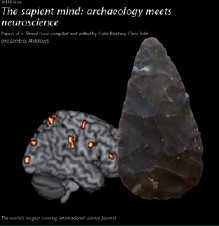 Merlin Donald has written a series of fascinating books on the emergence of modern humans, one of which I used extensively as a reference in my "Biology of Mind" book. He now reviews a special issue of the Proceedings of the Royal Society devoted to a conference at the Univ. of Cambridge titled ‘Archaeology meets neuroscience’. His review (PDF here) is well worth reading.

A major link between archaeology and neuroscience is provided by cognitive science, which has a foot in both camps. Some aspects of cognition, such as literacy, mathematics and music are obviously cultural in origin. Others, such as attention, perception and action stem directly from the design of the central nervous system. These two influences, brain and culture, work together in forming human cognition, and cognitive scientists find themselves in the position of having to explain many of the higher cognitive capabilities of human beings in terms of hybrid brain-culture mechanisms. Evolutionary models are one important way of ordering the evidence on hybrid mechanisms, and epigenetic factors may prove to be paramount in this process.

The ‘sapient paradox’ refers to a puzzle that has been a thorn in the side of prehistory researchers for some time. There seems to have been a long — in fact, inordinately long — delay between the emergence of anatomically modern humans and our later cultural flowering. Both genetic and archaeological evidence converge on the conclusion that the ‘speciation’ phase of sapient humans occurred in Africa at least 70 000–100 000 years BP, and possibly earlier, and all modern humans are descended from those original populations...a later period, extending from 10 000 years ago to the present, is referred to as the ‘tectonic’ phase. This has been a period of greatly accelerated change, stepping relatively quickly through several different levels of social and material culture, including the domestication of plants and animals, sedentary societies, cities and advanced metallurgy. It has culminated in many recent changes, giving us dramatic innovations, such as skyscrapers, atomic energy and the internet. The paradox is that there was a gap of well over 50 000 years between the speciation and tectonic phases. The acceleration of recent cultural change is especially puzzling when viewed in the light of the hundreds of thousands of years it took our ancestors to master fire, stone tool making and coordinated seasonal hunting.