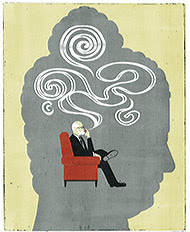 I found myself disappointed by what at first appeared to be a promising article in this past Sunday’s NY Times magazine: “Enlightenment Therapy” by Chip Brown. It relates the interaction of a 63-year old professor who renounced a tenured professorship in philosophy to become a Zen Buddhist monk 35 years ago and a psychotherapist who has published a series of books on psychotherapy and Buddhism. A detailed account of the professor’s childhood traumas, and their effect on his adult life, is given, but it seems a pity that the article is almost completely lacking in any broader reference to other religious figures and psychiatrists (Alan Wallace and Mark Epstein come to mind) who have been very influential in integrating Buddhist and Psychoanalytic insights. Even more puzzling is the absence of reference to discoveries in cognitive neuroscience that validate the insights of both traditions (noted by integrative writers such as philosopher Thomas Metzinger and trade writer Alan Nisker).

Posted by Deric Bownds at 5:45 AM
Email ThisBlogThis!Share to TwitterShare to FacebookShare to Pinterest
Blog Categories: brain plasticity, culture/politics, religion, self help