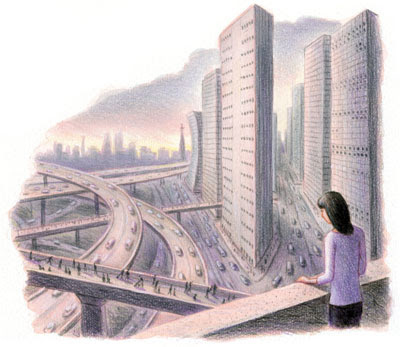 In the last article of the Nature Magazine "Being Human" series, Melanie Moses discusses humanity's greatest challenge: how to reduce the demand for energy in increasingly complex, networked and energy-dependent societies. A few excerpts:

To manage our impact on the environment and understand the ramifications of our actions in an increasingly interconnected world, we need a macroscopic view as well as a detailed understanding of the structure of the networks we have created. The bigger picture is beginning to emerge from theoretical approaches that reveal the structure and dynamics of networks, how networks change as they grow, and how networks constrain individual behaviour.

The Metabolic Theory of Ecology (MTE) offers one way to understand the dynamics of flow through networks. The mathematical foundation of MTE was developed a decade ago by a group of biologists and physicists who wanted to explain why so many characteristics of plants and animals systematically depend on their mass in a very peculiar way. The theory posits that much of the life history of an animal (such as how long it lives, how often it reproduces and how much it eats) is determined by geometric and dynamic properties of the cardiovascular network that controls its metabolism.

According to the theory, the larger the animal, the longer its cardiovascular system (its network of arteries and capillaries) takes to deliver resources to its cells. That delivery time, which in turn dictates the animal's metabolic rate, is proportional to the animal's mass raised to the power of ¼. Thus, because its circulatory system works less efficiently, an elephant grows systematically more slowly than a mouse, with a slower heart rate, a lower reproductive rate and a longer lifespan

... the implications of this basic idea — that networks become predictably less efficient as they grow — are profound. Indeed, MTE offers insights that could revolutionize the way we understand, predict and manage large networked systems. As well as suggesting that larger systems process energy proportionally more slowly than smaller ones, it implies that the rate at which a system processes energy drives much of its broad-scale behaviour, whether that system is an organism, society or technology.

...potentially more efficient ways to design infrastructure are emerging. My colleagues and I recently showed that some at least partially decentralized networks, such as computer networks and urban roads in cities (where half the world's population now resides), can increase in size more efficiently than purely centralized ones. For example, our models show that traffic, and so oil consumption, can be proportionally reduced as cities expand, as long as multiple recreational and commercial centres are placed near residential areas. Moreover, Luís Bettencourt and his colleagues recently showed that certain factors, such as innovation and wealth creation, increase super-linearly with city population. In this instance, the more people in a city, the more each person benefits from the collective ability to interact.

...we need to understand how social and infrastructure networks constrain individual behaviour, and structure cities and societies in ways that increase innovation-inducing interactions but reduce transport and travel distances. By doing so, we'll stand a better chance of meeting the needs of a large, voracious and growing human population without decimating the resources available to future generations.

Posted by Deric Bownds at 5:30 AM
Email ThisBlogThis!Share to TwitterShare to FacebookShare to Pinterest
Blog Categories: culture/politics, human evolution, technology